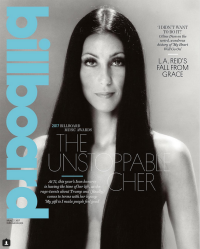 It took me a moment to gather my thoughts this week and this is going to be a long post. Very exciting stuff going on and some of it very important to Cher scholarship.

Remember last year on Cher’s 70th birthday when we had a plethora of celebratory articles? This year there were far fewer but then people were already talking about Cher’s Billboard award instead. Still there were some:

10 Facts You Didn’t Know About Cher - They even take issue with the fact that she’s not in the Hall of Fame yet.

Cher: A life in photos

Cher: See Her Top 10 Most Outrageous Outfits Ever

#BornThisDay: Cher (World of Wonder)  (thanks to Tyler)

Cher at 71: Her most incredible outfits in pictures (thanks to Tyler)

Kim Kardashian even had her own subset of birthday tweets and articles resulting from those tweets:

So, in support of Cher’s Icon award, Billboard Magazine did a series of tributes to her (see more in my opinion post, Cher’s Musical Oeuvre).

The interview: Cher Sounds Off on Trump's 'Cheating' & Why She's 'Not a Fan' of Her Six Decades of Hits

The article tallies up more famous Cher fans, (so now we have Pink, Christina Aguilera, Lady Gaga, Gwen Stefani, and the already-mentioned Tracy Chapman and Chrissie Hynde). Pink calls Cher a smart “sharpshooting rock star.” The article covers facets of her reputation: her blunt opinions, clothes, her swearing, her “fearlessness.” It culls out her award winnings and record breaking chart appearances. This is an old school article that actually sends a reporter to visit Cher in her Cher lair. (Remember those interviews?) The article touches on her androgyny and how she solidified an image on her television shows as “a woman who claimed privileges usually reserved for men, including honesty, independence and confident sexuality.” That’s even understated IMHO. The article also talks about The Sonny & Cher Comedy Hour’s technical innovations with chroma key. Author Rob Tannenbaum calls her current live show set a Parisian flophouse (nails it there) and says the show is “dizzying, festive and cheeky.” He calls her image during Geffen era the MILK of hair metal (funny and not totally off the mark).

This seems like a typo though: “There was one problem: no evident lack of talent.” Why would no lack of talent be a problem? There’s also at least one factual error,  stating that since Believe Cher has only released one album on a major label. She’s released two (Living Proof and Closer to the Truth on the same label).

The article states Cher has 3.3 million twitter followers and that Buzzfeed calls her “the world’s most beloved Twitter user.” (Sweet.)

Michaels credits Cher with pioneering the music video on her 70s TV shows and talks about age-bracketing his shows for content. He calls Cher not only the Goddess of Pop but the Queen of Rock and Roll (yeah, let’s get that one going). He admits “it must be strange for any celebrity to come face to face with an impersonator” and he talks about working on stage parodies of Witches of Eastwick. 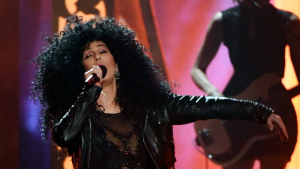 Why Cher Is More Musically Radical Than You Think

This is an awesome piece by Joe Lynch who  talks about the sexism inherent in rock criticism. He gives only a partial list of Cher’s accolades, (awards, sales, endurance, record breaks), and says “Cher’s impact as a musical force is unfairly disregarded or minimized.” He says music history is “refracted through a male, rock-privileging lens. But it’s also a casualty of music fans’ obsession with authenticity.” I would argue that even under the authenticity rubric, (which is ludicrous in what is essentially a posing industry), the standards are not evenly applied depending upon the rock clique you belong to.

Lynch argues that it’s not even fair to judge artists who don’t have full control over their material because even auteur-film-directors don’t have full control of theirs. I think we can look even closer than film: did The Ronnettes fully control their material? Did any Phil Spector artists have full control? Because many of them are in the Hall of Fame. Lynch gives Cher credit for auto-tune and she should get credit for fighting for it if not coming up with the idea for it on her song “Believe,” (even though I think that is a problematic accolade in rock music, again around issues of authenticity).

We can all agree, like Lynch says, that Cher didn’t pioneer genres or “take lyrics to new poetic heights” but she did “forge an iconoclastic path for vocal and visual androgyny in pop culture that’s frequently overlooked.” (I would argue she also did that with glam rock).

And for the storyteller songs most derided in Cher’s catalog Lynch says, “It’s absurd to argue those songs could have been as effective in the hands of another singer—sure they’re good story-songs, but Cher’s delivery is what makes these admittedly dated pop songs resonate…” Lynch says Cher “teed things up for people like Bowie and Patti Smith, and the world would certainly be different if she hadn’t stayed so irrevocably Cher from the start.”

A Look Back on Her Film & TV Career 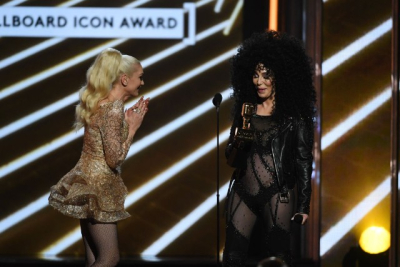 This article notes Cher’s influence on Katy Perry, Beyonce, Lady Gaga, and Rihanna, saying she has “left a trail of glittering breadcrumbs across the mood boards of designers and musicians.” Author Brooke Mazurek calls her “the original red carpet renegade and provides quotes from Michale Kors, Vogue Editor Andre Leon Talley and the Fashion Institute of Technology’s curator Kevin Jones. Mazurek also draws a line back to Marlene Dietrich and Josephine Baker and has Bob Mackie crediting Cher with bringing ethnicity to 1970s TV. (That is also a big thesis of the book Off-White Hollywood by Diane Negra).

Cher's 'Gypsys, Tramps & Thieves': Why It's One of the 20th Century's Greatest Songs

This is a great piece by Rob Tannenbaum who wrote the lead story. Cher is dismissive about the song and the length of the recording session but Tannenbaum calls the song “one of the most majestic pop hits ever made…a tale recounted at breakneck speed, of sexual hypocrisy…female and class consciousness…voyeuristic like a pulp novel…redeemed by a brash confidence Cher gives the narrator.”

Tannenbaum goes on to explicate the complicated story line, the implications of which most people blithely ignore as they sing along. This is real professional scholarship here! This could be a undergrad lit paper! Tannenbaum even deconstructs the song musically:

“The song feels urgent partially because of the breakneck pace: the band plays at 171 beats per minute. (For comparison, the Ramones’ “Beat On the Brat” is 157 BPM, and Led Zeppelin’s “Rock and Roll” is 164.) When she reaches the chorus, Cher suddenly sings way in front of the beat, an expression of anxiety. The lavish arrangement feels vaguely “ethnic” or “exotic,” thanks to mandolin and calliope, and also threatening, due to the irregular meters and some shreds of dissonance. It has the grandeur of a Phil Spector production, but with B-movie horror mixed in to it.”

He points out that Cher is never sexually “apologetic or sorrowful…but savoring freedom and rebellion… delivers the line [“Papa would have shot him if he knew what he’d done”] with chilling delight…[making] it one of the most lurid and sexy lines in pop music, merely through implication.”

The song, written by Bob Stone, has “plot, detail and emotional complexity, and Cher belts it with a punkish defiance. As a song about prejudice, poverty, and the consequences of pregnancy for working-class women, 'Gypsys' has aged beautifully.” Yes, indeed.

I love Billboard Magazine’s implicit affection for Cher’s anti-Trump tweets here. It’s their own condemnation of Trump and such a reflection of the mainstream, they let it go without any qualification or judgement. The article credits Cher as an advocate of LGBT and women’s rights, her political activism. Lauren Tom calls her a “a pioneer of female autonomy during a male-driven era.”

Press Before the Show 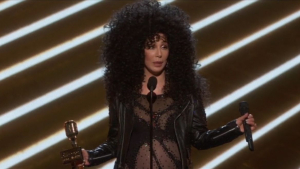 The internet was also full of stories rehashing the Billboard interview and reacting to Cher’s admission, (not nearly a new one), that she hates her own music. Every time she says that, people respond in such surprise.

After the BBMAs Coverage

My two cents: award shows seem now to be just excuses for launching elaborate musical performances from big arenas. I'm bored with it already, especially the Byzantine performances of Nicki Minaj (and ten variations of her throughout the night). I did enjoy the Chainsmokers (although it sounds like nobody else did), Julia (I like that funny "Issues" song), and Lorde's very inventive performance pretending to be at a karaoke club. I thought Celine was understated but great per usual (that crazy dress!). She had a lovely chandelier to sing under.

Gwen Stefani introduced Cher who then sang "Believe" and then we watched a career reel while Cher changed into the hole-fit and sang "Turn Back Time" and then accepted her award. I liked her speech which threw some props to Phil Spector, the Wrecking Crew, her mom, Sonny, David Geffen, Diane Warren and luck. Watch Celine Dion sing along to Cher.

GIF of Cher saying she can do a five minute plank.

Spend an afternoon with Cher GIFs!

Not to be confused with YOURS!