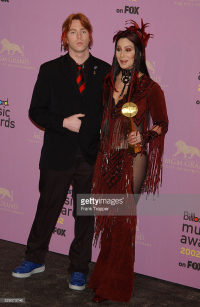 The big news is that Cher will be on the Billboard Awards May 21, (a day after her 71st birthday), at 5 pm Pacific, (check your local times and stations), to receive the Icon award and to sing "Believe." News announcing the award:

I heard this and wondered, doesn’t Cher already have a Billboard award from the 2000s. I checked Wikipedia's Cherwards page and found she's won the Artist Achievement award in 2002 (see pic to the left with her son Elijah, who considerately matched his hair color to her dress).

What’s the difference between these awards you may want to know. Cursive research shows nothing. This is the Billboard list of award categories and who has won the big categories like Artist Achievement and ICON. The Icon Award gets a dedicated Wikpedia page for some reason but with no explanation worth the effort: " to recognize music singers and contribution."

Here is Steven Tyler announcing Cher's Achievement award in 2002. It seems like a "lifetime achievement" from how Tyler frames it - the definition of longevity - and Tyler gives no mention of what the award recognizes or represents officially. These awards seem willfully vague and I'm starting to dub them Empty Hat Awards. Not that it's every boring to watch Cher win awards. Or satisfying for Cher scholarship. 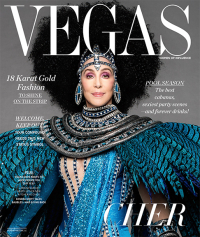 More press for the Classic Cher show from a Cher cover story in Vegas Magazine.

This led me to find other covers of Cher’s millennial Vegas shows: 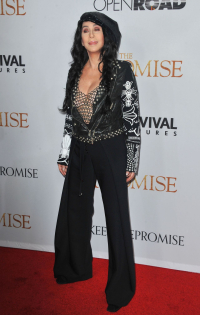 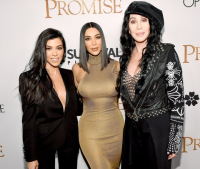 Cher recently attended the premiere of the Armenian Genocide movie The Promise and has been promoting it. From Armenian Radio.

You can also see who else is promoting the movie. And see a story about what Cher wore to the premiere. More from Extra TV.

Cher was photographed on red carpet with Armenians Kourtney and Kim Kardashian. Story on Daily Mail saying they could be sisters.

Paparazzi also caused a scene chasing Cher while she was going out to eat.

After news of the Met Gala this year, Cher said she might attend next year. Time Magazine covered this story.

Last week was yet another example of seeing the lowdown right wing media lies in action. Various conservative news sources, led by Breitbart News and FOX News, gleefully ridiculed Cher's dismayed tweets about the health care bill passing in the U.S. House. Slate correctly reported that Cher's comments had been misconstrued. (No shit?)

For years they've tried to label her a has-been, (she's winning a Billboard ICON award this month), and yet right-wing media never stops trying to ridicule her tweets. The effort never quite goes mainstream for them. In the infamous words of Trump: So sad.