On the Periphery of Cher

And there was a slew of Cher crew news recently as well...

The show Making History made a Cher reference (Thanks Cher scholar Tyler). 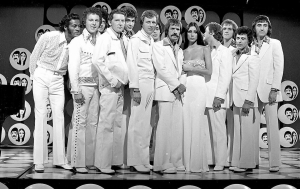 Two related celebrity deaths occurred: and who would have imagined Chuck Berry and Chuck Barris would die in the same week? (Thanks to Cher scholar Janet for this pic of Chuck Berry on The Sonny & Cher Comedy Hour.) It's my theory that Chuck Barris, besides connecting to S&C show alum Murry Langston, a.k.a The Unknown Comic, is the voice of the M.C. on Sonny & Cher Live.

And finally, there was a lawsuit over Cher's Closer to the Truth album logo design. Two stories:

I asked two local designers in my office to weigh in:

One said: “Clearly similar but hard to prove imo... that elaborately calligraphic style, and bodoni-like typefaces have been having a moment. That R though is exactly the same."

Another one said: “Yea, that’s a tricky fight when it’s a font. Mosaic Nadav's Paris is very specific beyond the average font and Cher’s design looks like they just let the font basically be the design but with slight changes. This being a mass distributed album that’s pretty lazy design… and yet designers do that all the time so I’m glad the Cher designer got called out on it.”

Called out but not successfully sued as it turns out: "Cher wins dismissal of lawsuit over album cover font" (Reuters)