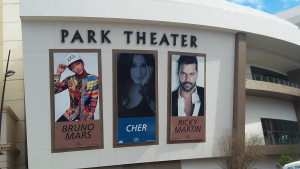 Every Cher fan goes through this at some time or another, the Cher show you have great tickets for (6th row!) gets cancelled. Two weekends ago, I was one of these fans who trekked out to Las Vegas right about when Cher cancelled a weekend of shows due to illness.

As I was crying in the bathrooms of Sam’s Town, (the casino that inspired The Killers album/song),  I counted and this would have been my 13th Cher concert. Poor me. Some fans have yet to see one. I wasn’t literally crying in the bathroom. I was drunk in the bathroom and still managed to count all the Cher shows I've been to. I literally cried three other times: an aggravation cry in the car on the way to Vegas (around Laughlin) when I got the tragic email from TicketBastard, one short ugly cry in the hotel bathroom where Mr. Cher Scholar couldn’t see it, and one long soulful cry after I got home, a cry that was just as much about the collapse of all that is good and holy in this world as it was over missing that Cher show, but nonetheless a cry initiated by watching a bootleg video of the new show's opening Cher descent.

My weekend in Vegas was full of rationalizations:

Then why was I having such a dramatic crisis of the heart?

It’s not like going to Vegas to see Cher is some kind of pilgrimage, right? That's where celebrity obsession needs a body check. There was one woman outside the casino, close to Cher’s looming picture (above), literally sobbing into a friend's shoulder. For like a long time! I was hoping her cat had died or that she’d just experienced a traumatic breakup with a pathetic loser because I didn’t want to think she was crying (1) that hard (and 2) in public over missing a Cher show. But I surmise the greater distance and effort you spend on the trip to Vegas to see a Cher show, the harder the cry. I only drove from Albuquerque.

And there were other repercussions of a cancelled Cher show. We couldn’t get into any other shows, (no Diana Ross, no Beatles Cirque du Soilel, no Absinthe). Shows half full on Friday night booked up quickly by Saturday afternoon. All those damn Cher fans set adrift. I can’t tell you how my party salvaged this weekend, (what happens in Vegas stays in Vegas), but I can tell you it involved a very hot Robin.

I have now been fully initiated as a Cher fan, long suffering. Some very muted highlights of the trip:

I went to the Park Theater anyway to see the Cher stands and promos and dragged Mr. Cher Scholar on a mission to photograph all three "era" posters: 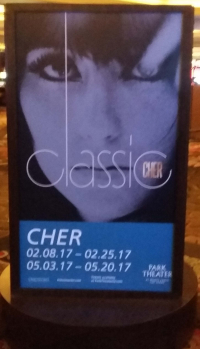 Standup near the back door / poster in the lobby / billboard on the south end of the strip (click to enlarge).

I was also able to play the Cher slot machine which was set up outside the Cher swag store. Mr. Cher Scholar had to sit through my playing it only twice (I get easily bored gambling). I was very amused at the slot symbols that were made to represent Cherness: leather jackets, tambourines, VIP concert passes. 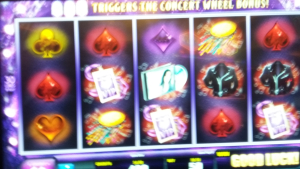 When I would hit anything big, loud Cher music would play for such a length of time that nearby gamblers would move seats for ten minutes until the machine stopped bellowing. Good footage of the drama. You're seat would also vibrate if you won or came close to a win. I hope someday these things are cheap enough for home purchase.

Because there is pop-culture grace left somewhere in the universe, the Monte Carlo Park Theater Cher swag store was still open and I was able to get a program. The swag store does have a few new things but many of the items are hand-me-downs from Dressed to Kill tour. 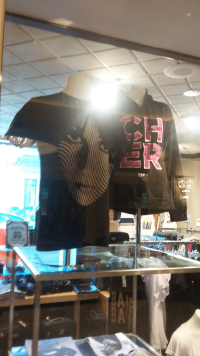 Two sides of the big Cher store / the lobby store.

And the weekend wasn't entirely sucky with good food and good friends. Posted at 09:08 AM in Concerts, That's The Obsession Talking | Permalink | Comments (0)