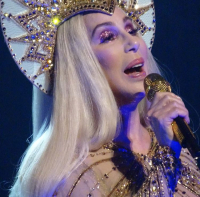 There's been so much Cher news over the last month and a half, I feel like I can’t keep up sometimes. So I have great sympathy for Daniel of Cher News when he announced recently that he is going to stop posting again. Such a good news source, especially for overseas stories.

There was plenty of Flint water crisis movie news this week, (all the way to Belfast!), especially when last week news broke that Cher was dropping out due to a family crisis, which allegedly involves her ailing mother, Georgia. Our thoughts and prayers to Georgia and her many loved ones.

Here are the news stories about it:

The documentary Cries from Syria also came out on HBO along with versions of Cher's new song "Prayers for the World." I’ve recorded the movie but I've been afraid to watch it. The violence and suffering warning has scared me from it. I need to grow some stones and do it already. Here's a review of the movie, Cher's song with film footage, Cher's song without film footage.

Cher also tweeted about an Armenian genocide movie she found moving called The Promise. Thank you to Cher scholar Tyler for that link and for also locating this news footage about Cher’s visit to Armenia.

Classic Cher is now in Washington D.C. for a spell and apparently has a new “Lie to Me” interlude.

Some local reviews of the show:

Other interviews & promotion for the tour:

The Washington Post did an interview with Cher that's annoyingly showing up verbatim everywhere else: "Cher on EGOT-ing, politicking and touring once more (Watertown Daily Times) and "Cher still rocking in new shows" (Journal Gazette) are two examples. 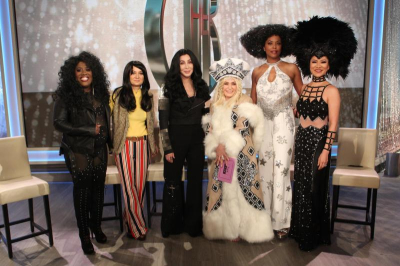 Cher was also on The Talk for a full hour. It was fun to see the hosts dressed up as Cher, (Sharon Osbourne is tiny!), and you can really see the influence of Graham Norton and Andy Cohen on talk shows now which are mostly a sequence of Cher games. How else do you come up with original questions to ask someone who has been interviewed over and over again for over 50 years? It was nice to see Bob Mackie brought into the interview mix for some variety.

Reviews of the show: