After the disastrous attempt to see the Classic Cher show live, I came home and watched the show from clips online. Photos below area culled from screenshots. 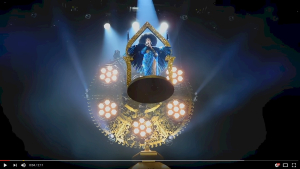 It’s true the songs in this show are recycled from other hit shows. It’s true most of the outfits are also recycled. But tweaks can be found all throughout and the show is very beautiful nonetheless. I loved the gilded iron lace theme of the small stage.  Although I didn’t see them all, (this is far from a view of a show I was fully immersed in), there seem to be some new and creative interludes. Vegas theater sound is so much better than arena sound but then that’s an aspect compromised by the dryness of the air that stunts the voices of the singers.

The big intro: I’ve only seen small pieces of the video introduction. Is that new stuff I see in there? Cher descents in a similar apparatus she used to fly over the crowd in D2K, repainted. Recycling is good.

Woman’s World:  Cher dons a large and beautiful afro wig, an amazing new blue dress and fabulous earrings. Her eye makeup looks great. Is this wig a nod or a snicker at her neighbor at The Venetian, Diana Ross. It's interesting that Cher’s last Vegas show at Caesars overlapped with Bette Midler's and that these two are her bffs-turned-sour after Cher's 80s Caesars show with its before-its-time male impersonations of Ross and Midler?

The dancers look very similar to the shield-wearing warriors of D2Ks Take it Like a Man. 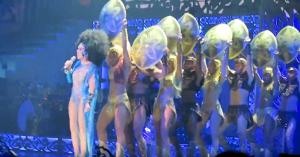 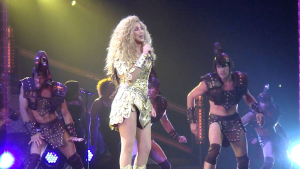 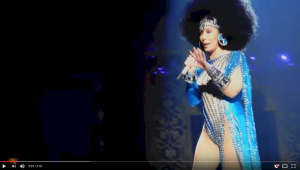 Cher’s monologue: I enjoyed this much more than previous monologues. Cher talked about wives wanting to see Cher in Vegas because we don’t know how much longer she’s going to be here…she’s 70 after all. She referenced composer John Philip Sousa when talking about her breasts. She called Dr. Pepper the white trash white wine spritzer. She did a Q&A, prefaced with the rules she doesn’t do selfies, hugs or politics. Later she added marriage proposals and diner proposals. Her responses seemed very genuine. She said, “From bottom of my heart I’m so happy you showed up! You never know” and laments that they worked until 3 am and then again in the afternoon so her voice was shot but “my heart is good.”

She gave a sassy, abbreviated version of “Let’s start the show.”

In an alternate version on another night, Cher tells the story of meeting Sonny in this monologue spot. She catalogues her childhood attempts to run away and her jobs with Robinsons May department store docking time cards, a job her step-father secured for her, and the job at See’s Candy Store. In the middle of it, she said, “I have to come down. I get so nervous.” Cher described everything Sonny was wearing when she met him and “his beautiful hands,” how he loved her friend Melissa “but she couldn’t dance.” She described the big girls apartment where she lived and where Sonny moved next door. Cher wasn’t paying rent and was kicked out. She tells the cooking and cleaning story and where Sonny says, “I don’t find you attractive" and comments "Just what you want to hear when you’re 16.” Cher said girls came all hours at a night. She abruptly ends on how Sonny liked girls who had big boobs.

Strong Enough: Similar warrior shield dancing as we saw D2K. You know me: I like synchronized dancing.  Cher loses the body scarf on the blue dress and it reveals one butt cheek. The end is great.

Cher changes into her Sari costume and returns on the big old Farewell elephant singing the Gayatri Mantra. The sari is pink now instead of blue. 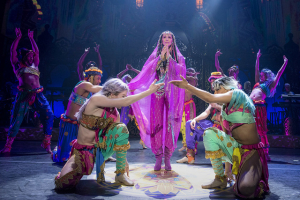 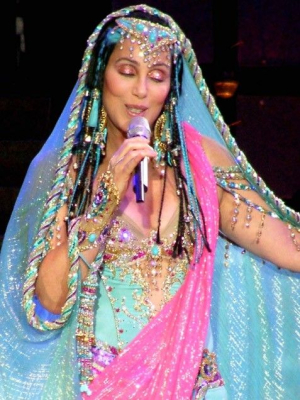 The elephant looks glad to be out of storage. This is one of my favorite numbers due to the beautiful colors. Watching one of these bootlegs was the first time I ever saw Cher crawl back into the chair of the elephant.

All or Nothing: Cher exits the elephant’s butt. Great lights behind the iron lace stage and the flowing fabric of Cher, who sparkles. Another fun ending. A similar hip-dance for this song.

Cher changes into a Farewell version of the 60s Outfit with rainbow pants versus original mostly purple outfit and the red mini dress of the last Vegas show. I like this one the best. 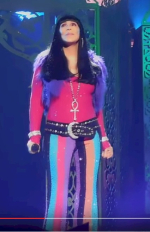 The Beat Goes On/ All I Really Want to Do:  She lets Sonny sing his parts while the record-store-promo video plays. It’s cool way she still sings la di da di da very emphatically.

View from farther back: Another monologue: In the opening show she tells her Sonny story here and how when she met him she was “scattered as a person. Everybody in show biz looked like Doris Day, she said, except Annette Funicello. Sonny saw raw talent and “started to do the clay thing.” She said, “Now is the time I can do this song [IBUB]. I can do it now.”

I Got You Babe: She sings with sonny with a face of love and serenity. Early 1970s film footage, (Sonny with mustache and short bangs), matches Sonny’s singing but the song ends with another singer doing Sonny’s part. This is the same routine as in D2K.

Cher changes into the gypsy outfit which is similar to the D2K show, a thick bilateral skirt of many layered colors. The headdress is more extravagant with elaborate hair braids and she wears prettiest bra you ever did see. 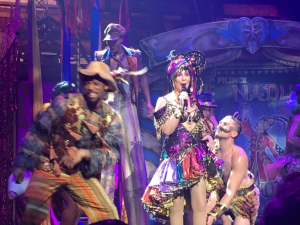 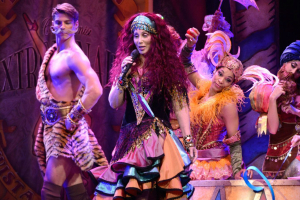 Gypsys, Tramps and Thieves: There’s still the stilts guy and the muscle man with a mustache guy. I miss the Caesar’s show gypsy wagon. Looks like a new leopard girl whom Cher pets. As always, the medleys are very short. 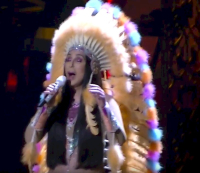 Cher changes into the Half Breed costume. You can just about only pace the stage in that thing.

Cher changes into the burlesque costume.

Welcome to Burlesque: Much like movie and D2K version with the movie's outfit and marquee. Good lighting sequences.

Cher changes into a blue version of Take Me Home outfit.

Take Me Home: The video montage over the stage shows album covers whirling in a wheel. Lots of audience phones record this. I feel like the disco dancing has gotten better but maybe this is the same disco dancing from the other shows.

The movie/tv montage:  I saw part of a movie montage, as expected, before "After All" and if there was a TV montage, it's missing from online snippets of the show.

Cher changes into what I’m calling the angel fit, a variation of the outfit she wore for the encore of D2K where she sang “I Hope You Find It” with the angelic crown and the blonde hair. Same idea anyway with more bling and less braids. 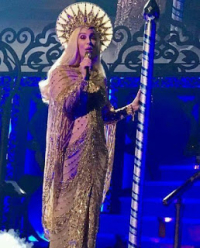 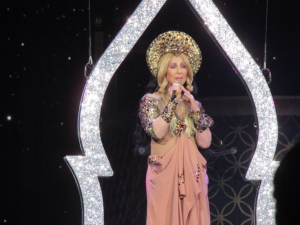 After All: This scene is similar the Cher-on-gondola cruise over a misty river we saw from the Caesar’s show minus the hanging lights. 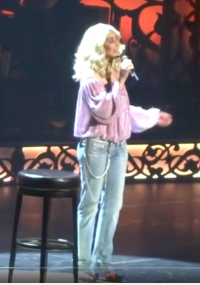 Cher changes into her latest casual-fit, a pink top and jeans.

Walking in Memphis: A great Memphis street set. I only glimpsed some of the wording on the street signs: “BB King’s Company Store.” This is the step-stool moment and she sounds good.

The Shoop Shoop Song (It’s In His Kiss): New gals plus 60s-style dancing.

Cher changes into her hole-fit with big 80s wig. 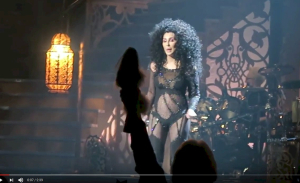 I Found Someone: Similar to other shows with the guitarist moves on stage.

If I Could Turn Back Time: She throws off jacket. She seems peppier. She’s enjoying this show. Skips off stage.

The photo at the right cracked me up: one fan holding up a Cher doll for Cher to see.

For a while there are three Chers:  one on stage, on on the big screen, and the little one in the phones. Cher changes into her Believe-fit which seems like a mash up of previous Believe-fits.

Believe: Cher either singing above the stage or a hologram. Can’t tell. There’s a crazy-fun interlude of lasers and sounds. Cher enters the stage in a red wig. 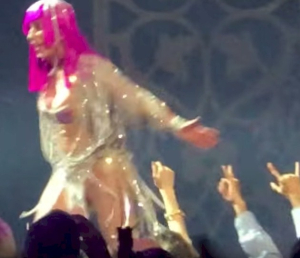 At this moment, Cher starts slapping the hands of front-row fans. Their germs make her sick.

Promotion before the show:

Access Hollywood (talks about Sonny and asks, when will I cut my hair?)
Entertainment Tonight (Says she's not dying.)

Cher and Las Vegas have got each other again, babe (Reuters)

Did Beyoncé Mop Her Grammys Look From Cher?

I think it is terribly sad, that , each time cher returns to las vegas-type venues; she boasts about how wonderful it is be in those types of theatres with their state-of-the-art technological advances that will allow her to do really amazing and cool thinks for her show.

THEN, she proceeds to do NOTHING new or different or amazing or cool---- just the same ole same ole.

after all this time and she STILL seems to be so insecure about herself and her talent as a performer.