And We’re Still Talking About Believe 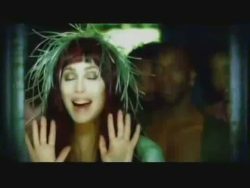 And there were a few articles recently commemorating Cher's 1998 song "Believe":

Revisiting Believe (thank you to Christopher)

Also, The Voice auditioner Taylor Alexander surprised the show's judges with a countrified cover of "Believe" that I actually liked. I tend to like the country versions better for some reason.  I’m not a huge fan of "Believe," truth be told, but I will defend it if pressed. How often does that happen, you might wonder. Well, last week actually.

I’m taking an Central New Mexico Community College class online on pop culture and during two weeks ago we read this essay: “Seduced by ‘Perfect’ Pitch: How Auto-Tune Conquered Pop Music” by Lessley Anderson. The author states, "The Auto-Tune or not Auto-Tune debate always seems to turn into a moralistic one, like somehow you have more integrity if you don’t use it, or only use it occasionally." Our discussion question was, how could a music debate turn into a moralistic one?

This was my (ahem) very lengthy response:

Discussions about Auto-Tune turn into moralistic debates because they can’t turn into craft debates. They are similar to debates about other film and sound engineering technologies going back to soft-focus filters on Bette Davis.

It is immoral to come across as more talented than you are? This seems to be the issue with Auto-Tune’s vocal pitch fixing. Many critics believe singing is either a honed craft or a punk rebellion against craft. As a dance track, “Believe” isn’t punk enough a rebellion. Also, Auto-Tune is a tool used for chasing perfection.

America is obsessed with perfection: models are airbrushed in magazines, viewers protest when someone sings out of tune on live show, we are even fearful of singing in public ourselves due to our less than professional imperfections (Drew, 270-286).

Yet Americans also have an obsession with authenticity. It’s hard to find a music genre devoid of affectation around authenticity. And because judgements about music resist objectivity, (e.g. what matters most: reviews, awards, record sales, concert sales, legions of fans, breaking records, longevity? *), we resort to moral judgements around who is more ‘real.’

However, it was more than Auto-Tune compromising the song “Believe.” Ever since disco, dance music has been criticized for political and social reasons (Myers). Cher herself has always struggled for respect. Sonny & Cher were not seen as authentic folk artists and Cher was not perceived as an authentic rock artist in the 1970s or 80s. In the mid-80s Cher earned respect for acting performances. Now, ironically, her success as a celebrity on Twitter has been attributed to her level of authenticity (Wortham).

If we truly believed in authentic moments, we would be attending only un-mic’d live performances and not purchasing any recorded media. Cher and the producers of “Believe” used Auto-Tune in a novel way and whether you like the sound or not, this amounts basically to learned preferences and biases, not objective aesthetics.

*Cher has hit all these metrics and yet is still not respected as a musical artist.

Drew, Robert. “Anyone Can Do It: Forging a Participatory Culture in Karaoke Bars.” Hop on Pop: The Politics and Pleasures of Popular Culture, edited by Henry Jenkins, et al., 2002, 270-286.

The Influence of “Believe”