Where We Are Now (with Great Cher News) 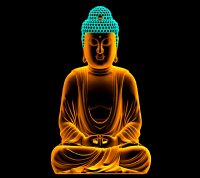 Before we start, I'd like to share this zen parable I learned many years ago. This story has helped me in both good times and in bad:

There is a Taoist story of an old farmer who had worked his crops for many years. One day his horse ran away. Upon hearing the news, his neighbors came to visit. “Such bad luck,” they said sympathetically. “Maybe,” the farmer replied. The next morning the horse returned, bringing with it three other wild horses. “How wonderful,” the neighbors exclaimed. “Maybe,” replied the old man.

The following day, his son tried to ride one of the untamed horses, was thrown, and broke his leg. Now he would not be able to help on the farm. The neighbors again came to offer their sympathy on his misfortune. “Maybe,” answered the farmer. The day after, military officials came to the village to draft young men into the army. Seeing that the son’s leg was broken, they passed him by. The neighbors congratulated the farmer on how well things had turned out. “Maybe,” said the farmer.

Where I Am Now

So...I haven't been posting for the past three or so weeks. First it was the week before the U.S. election and work was very busy at CNM. Then the week of the election happened and many of us, (I would argue the majority of us) , were feeling stomach cramps and living the U.S. Electoral nightmare. And I have to tell you, something in me changed on November 9. It was as if the election showed me what my special purpose was, to quote Navin R. Johnson. I've been spending the last few weeks organizing and setting up some new messaging initiatives against what I see as the encroachment of Fascism and racism in my country and around the world.

Elections have consequences, as President Obama has often said. For our purposes here at I Found Some Blog, I no longer will have the time to post long, academic Cher tracts beyond the latest news. Something's gotta give after all. I'm working on a novel and two other writing projects. I can't take on the new commitments of activism without giving something up. So no more play-by-plays of the television shows and long reviews of albums. I actually had three of the last four Sonny & Cher show wrap-ups ready to go. But there's no time to finish them now. My gift of gab is now "going to the cause" and that means getting active in my community, motivating Democrats to vote, and wearing my safety pin as a reminder to fight racism and hatred every single day.

If these are values you share, please come by my new Facebook page "BTW New Mexico is a U.S. State," LIKE the page, and SHARE some of the posts with your friends. I would sure appreciate it. 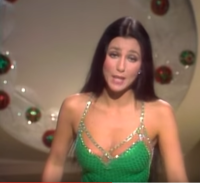 But even Dark Ages had good times. There has been some great Cher news over the last three weeks and we're thankful for tender mercies, we are.

Cher scholar Bruce Barton notified us recently that on Monday December 5 GetTV will be airing the rarely seen 1975 Cher Christmas show. He also linked us to a clip of the festive intro. Can't wait!

And according to the GetTV schedule, there are other goodies in store.

December 5: The 1975 Christmas Special with Redd Foxx, The Hudson Brothers and The Lennon Sisters. It looks like it's the full hour show.

You may have heard that Cher is doing some limited shows in Las Vegas and Washington, D.C. next spring. Miraculously I was able to get tickets to one of the Vegas shows. Check out Cher's site for details.

Cher as also on James Cordin's late night show around the time the tickets went on sale. Watch Cher and James singing "I Got You Babe" and  Cher talking about "I Got You Babe".

She was also on The Today Show.

So the Broadway show is also actually coming together. From Playbill:

There will be a two-week staged reading in New York City January 2-14. Pitch Perfect’s Jason Moore will direct. It's being called The Cher Show. Flody Suarez and Hamilton’s Jeffrey Seller are producing. And some details were revealed. The characters of Cher are Babe (teenager), Lady (solo) and Star (which sounds like her evolution to icon). Other characters include Sonny, Georgia, Bob Mackie, David Geffen, Gregg Allman, Robert Altman, Rob Camilletti, and Sigmund Freud. Different era Chers may also talk to each other. The book was written by Tony Award-winning Rick Elice (of Jersey Boys, Peter and the Starcatcher). Cher songs in the show may include  “I Got You Babe,” “Gypsies, Tramps and Thieves,” “Take Me Home,” “Believe,” and “If I Could Turn Back Time.” Tony winner Daryl Waters is musical supervisor.

Cher scholar and one of the contributors to Cher Zine 3 has published a memoir called Farm Story! I'm very excited to read this as soon as I can finagle a copy.

Cher was also interviewed for the Fast Company Innovation Festival, "Cher on Creativity and the Power of Authenticity."  I was disappointed with the piece but the "big show" comments were interesting and her ideas around emojis, which are now considered fine art!

Posted at 11:44 AM in Concerts, History, Television, Vamp Bulletin, What This Really Says About Me | Permalink | Comments (5)