The I Paralyze Re-Release 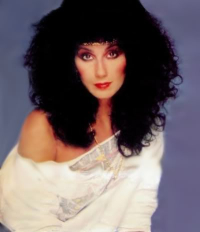 The re-release of the album I Paralyze came out recently with a booklet of liner notes by Quentin Harrison whose bio talks about “equalizing the commentary field for music in need of critical dissemination.” Sounds a bit wordy but surely good for cultural re-evaluations of Cher. He says she is, “instantly synonymous with glamour, empowerment, humor and wit” and that “her reach has extended into both music and acting, forming a two pronged approach to her legacy.” Do legacies have prongs? If so, Cher has more prongs than two. The great thing is, Harrison interviewed album producer David Wolfert who provided valuable insight into this obscure album as being one of the “pockets of lost Cher music” which I take to mean awesome but underappreciated Cher albums. Harrison lists 3614 Jackson Highway, Bittersweet White Light, (a controversial inclusion but one I agree with), Stars and I Paralyze.

Harrison talks about Cher’s “pyrric stay at Casablanca records." I looked it up: pyrrhic means "won at too great a cost to have been worthwhile for the victor." I'm not sure how to use this adjective with Cher's Casablanca albums. Two were not that victorious at all. One is arguably a good disco album. He calls Take Me Home “shrewd but satisfying.” I can accept that. Prisoner he calls “muddled.” Ditto. He says Cher signed with Columbia in 1981 while she was launching an acting career in New York City. He calls this “Cher’s most cohesive LP since Stars.” TMH seemed pretty cohesive to me if too light. Cherished was cohesively kitschy.

David Wolfert says, “We didn’t want to make a dumb pop record, neither of us were in the mood" and that they worked to streamline "the ambition of Black Rose but avoiding the fluff of Prisoner.” He talks about “the sensuous, sci-fi grove” of IP. Wolfert wanted make an album you’d listen too from end to end.  “We took a long time to decide what order things were in...Cher and I talked a lot about the sound of the album…it wasn’t going to be slick, it wasn’t going to be overproduced.” 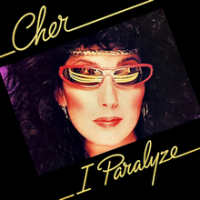 Wolfert said he went through a thousand songs and narrowed a list down to 40 or 50 and Cher and Wolfert picked from those. Cher brought in “Rudy” and wanted Wolfert to write with Desmond Child [on “Walk with Me”] “which was fantastic,” Wolfert says. Harrison describes the song “Games” as “the shadowy ballad gave Cher’s contralo room to breathe." Wolfert says “We worked long and hard on that one, especially the vocals.”

Wolfert wanted "Walk With Me" to be first single instead of "I Paralyze" but Cher scholar Dishy reminded me that it was actually "Rudy" that was released as a single first. “I wasn’t around for the decision,” Wolfert says, adding IP was recorded “as an afterthought because they thought it had the best shot of being a single.” This sounds like Cher’s first overproduced moment. I doubt "Walk with Me" would have fared better.

This album seems largely a regression, with Cher yelling her way through such adolescent rock ‘n’ roll as Rudy, Games, Back on the Street Again and The Book of Love (a new song by Desmond Child, unfortunately, not the old Monotones hit). It’s hard to tell how seriously she’s taking all this, since her delivery often sounds as if her tongue were literally as well as figuratively in her cheek. There are two interesting tracks. One is I Paralyze, co-written and produced by John Farrar with the intriguing tone and synthesizer feel he used on Olivia Newton-John’s Physical LP. The other is a Micheal Smotherman-Billy Burnette tune, Do I Ever Cross Your Mind, a slow, moody piece in which Cher seems to be drawing on her talent and experience instead of the same kind of awkward, unflattering decorations she uses on her body.

[They did not just go there.] 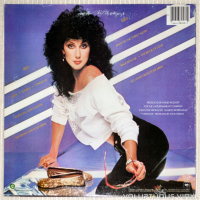 This Popdose review has another take, saying the song IP sounds like an outtake from Olivia Newton John’s album of the same era, Physical.  Let’s revisit a few of these ONJ Physical tracks for comparison:

- Landslide:  This songs has really full drums and depth and more unique accents than the IP tracks.
- Make a Move on Me: This song has hit all over it—what a great aerobic song it was. It probably encapsulates my entire philosophical and sexual ethos at age 16. Unfortunately, my love life then was as hot as Olivia Newton John’s dancing.
- Physical: Just tighter sounding than IP.
- Recovery:  Wow. What a video. Men inexplicably in a cage. This reminds me fondly of John Wait’s video for his song Tears.
- The Dolphin Song: The pre-teen animal rights activist in me loved this song.

“We all felt that record was under promoted,” Wolfert argues. According to Popdose: Cher only made “dulsatory (“marked by absence of a plan") appearances on Solid Gold and a rapidly aging American Bandstand to market it.” I’ve never seen the Solid Gold episode.

“No one tells Cher what to do,” Wolfert says. We’ve heard this sentiment from time to time since the late 1970s from producers of her solo albums. Is this an overreaction to a decade of being pushed around by Snuff Garrett and Sonny in the studio?

The liner notes talk about the album’s “polite touch of new wave.” And here is where the album's issues sit, in the new wave sensibility of its sounds and photo artifacts. Something about Cher just doesn't meld with New Wave. Yes, Cher…an artist who can meld with just about anything.  I actually like this album but I can completely see why it didn’t fly with new wave audiences.

Rudy – I liked the new tough-sounding belting from Cher, especially at the bridge but the music seems too low and muddled, not defined. The song could have kicked ass with more oomph from the backing vocals, keyboards and drums. Overall, it’s a kid-culture fail. There are also some awkward moments on the “why-y-y” and the “Remember” vowel slippages. But this is only recently post-Black-Rose and Cher is just getting her rock-voice legs.

Games is a lovely vocal and a great potential format for a Cher song. It’s a smart lyric about life experience. The metaphors are good but the production feels like a demo instrumental. There are more vowel slips. Like “Rudy,” it needed more instrumental texture. The guitar bridge almost sounds like a Little River Band song.

I Paralyze is fun but like a drum-machine among plodding instrumentals. Her vocals are fine but after many years I still can’t parse out some words and phrases. In fact, I could use help with the chorus if anybody knows the words. "Everybody’s sober and no one lies?" "Green as a dollar bill" or is it "greed as a dollar bill?" When the Love is Gone - Again I like this song and its movements from soft to hard. But the piano just doesn’t sound present. Again it's just demo quality. The bridge sounds very similar to Earth Wind and Fire’s "After the Love Is Gone" (1979) without that song’s soft groovines. I have listened to this song probably over 200 times since 1979. The words in the bridge I cannot decipher at all.

Say What’s On Your Mind is ok. Some fine belting.

Back on the Street Again - What is not to like here? The original is great as it is,  (although, I could digress with a whole other post about that red jumpsuit). The synthesizer is a bit cartoonish and Cher inexplicably went safe with “gave every night” instead of “came every night” but then wanted to be on the “street again” instead of on her feet. Is this an empowering 80s woman “taking back the night” moment? Is it best not to represent anyone as being overly orgasmic? She gives the bridge a strong go of it and I imagine she probably loved the guitar part. It’s the best track on this album, IMHO. I was irked by the liner note’s attempt to correct the misspelling of The Babys with the dumbfounding possessive The Baby’s instead of The Babies (the baby’s what?) and then calling the song in the liner notes “Back On My Feet.” There are more than a few typos in the booklet.

Walk With Me is the Desmond Child song with typical Desmond Child atmosphere and his recognizable 90s pop-rock transitions. This song could easily have found itself on any of Cher’s Warren-Child infused Geffen albums. Similarly, it’s repetitive and plodding.

The Book of Love is very 80s-campy. I like the Michael Myers sounding piano and the bitchy chorus. “Chains of lovers” recalls the 80s magazine profiles of Cher with the obligatory sidebar of her love relationships. Another good guitar solo.

Do I Ever Cross Your Mind ends the album on a Allman-esque country note. It’s a quiet, sincere vocal although you have to sit through a dated keyboard arrangement in order to enjoy it.

This expanded edition of the album gives us two alternate versions of "Rudy," both with an alternate bridge of “I Love Yous” that was probably good to dispense with.

All of Wolfert’s instrumental tracks are included as well. Do these instrumentals add anything since they’re not that impressive in the first place? Not that they’re necessarily bad but it makes me wonder if  someone involved in the project preferred the album without Cher in it? David Wolfert maybe, considering "I Paralyze," the John Farrar’s single is the only track lacking an instrumental doppelganger?

To be fair, these are some interesting experiments in Cher doing new wave and it sounds like she is enjoying doing it. But she’s better suited, dare I even say it, to Bon-Jovi rock. Cher is too much for this genre.

The album does get good Amazon reviews and it’s one of Gordon Ashenhurst’s favs.  He says, “of all her Geffen releases it is only on I Paralyze where the one-size-fits-all power-rock formula is not relied upon” Oh, he says she’s singing “you’re as real as a dollar bill!” Huh.