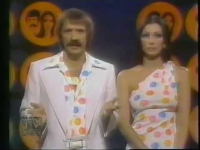 I am getting whiplash or with these shows bouncing around. Week 3 takes us all the way to the end of 1973 in Season 4 for the episode Years Part 2. Yes, it’s true, we haven’t even seen Years, Part 1 yet. But as it turns out, the originals were never aired back-to-back either. They were shown two months apart. These are nostalgic, where-are-they-now episodes with musical guests from the 1960s.

Wolfman Jack starts things out by getting his Sonny & Cher records ready. He has an unbelievably hairless chest. Sonny and Cher come onstage in rainbow, polka-dot ensembles singing the Danny and the Junior’s song, “Rock and Roll is Here to Stay.” All the guests appear on the opening stage to sing the opening medly--all which makes the iconic opening feel cheapened and crowded. The nostalgia feels particularly manic, as well. Neil Sedaka sings “Breaking Up is Hard to Do” at the piano, Peter Noone, who never looks very comfortable, sings “Henry VII,” Paul Anka croons “Diana,” and The Coasters sing “Charlie Brown” with odd hitch-hiking choreography. Sonny & Cher provide backup through all this and everybody has coordinated, white suits. I have to say, I've never liked these Years episodes, back from when I first saw them on our cable access channel back in the early 1980s. It’s like a blast of kitsch coming at you too fast and furious.

In the opening  dialogue there’s a boob joke, a Sonny naked joke, and a Watergate joke. As Cher sings, we get a glimpse of early giggle TV. Her garage-door blue eye shadow is impressive, however. Wolfman Jack introduces another “Sonny & Cher mythology” skit that again tells the story of how they went from rock stars to nightclub entertainers to TV stars. At this time, tabloids had already started publishing stories about big, behind-the-scenes blow-ups between Sonny & Cher, going as far as to dub them The Bickering Bonos. They bicker throughout this skit, too, with short jokes, Indian cooking jokes (Sonny complains about her Buffalo pizza: “I’m still picking arrows out of my teeth”), Italian-mother fat jokes, nose jokes, jokes about Sonny’s musical pedigree. It’s interesting to note how these ethnic jokes might have signified entirely different things to people back in 1973. I would still like to know how the history of Cher’s use of Indian iconography and genealogy is perceived by actual American Indians (then and now). 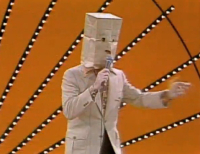 Murray Langston is seen prominently in this skit at the bar. Mr. Cher Scholar and I just watched Chuck Barris’ The Gong Show Movie (not the same movie as Confessions of a Dangerous Mind) in which Langston’s portrayal of the Unknown Comic stands out. The movie also shows an amazingly young cameo performance by Phil Hartman.

They air an old video performance of "Gypsies, Tramps and Thieves," the one with the yellow fringe dress and the gypsy wagon. GetTV airs a skit about fathers in the waiting room that I had never see aired in the TV Land before with Teri Garr playing a nurse among new fathers who are losing their minds.

The concert portion is a medley held together by the song Peter, Paul and Mary song “I Dig Rock and Roll Music.” Cher wears a red dress and a red bobbed wig. Everyone else is coordinated in suits of black and red. It’s all very manic like the opening. It’s interesting that none of Phil Spector’s acts were hired for these nostalgia shows. I’m surprised that Neil Sedaka is taller than Paul Anka and I’ve always had those two confused.  The Coasters sing “Poison Ivy,” Neil Sedaka sings “Calendar Girl, Peter Noone sings “I’m Into Something Good,” Paul Anka sings “Put Your Head on My Shoulder,” S&C sing “All I Ever Need Is You” (hey, these S&C songs aren’t all that nostalgic so far; they’re recent hits!), The Coasters sing “Yakety Yak,” (and I really don’t dig these gimmicky songs), Peter Noone sings “Mrs. Brown,” Neil Sedaka sings “Happy Birthday, Sweet 16,”  S&C sing a very affectionate “I Got You Babe,” Paul Anka sings “Lonely Boy,” and S&C end the marathon with “All I Really Want to Do” in a very similar arrangement to what Cher uses to sing the song to this day.

GetTV does not air the 1960s-era Vamp skit which includes a skit with the Maharishi and Marilyn Monroe. I remember the TV Land version itself included some Batman characters in the recap but an actual Batman skit was missing from the aired sequence. 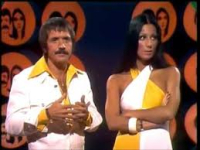 We fly back to 1972 with Merv Griffin's second appearance on the show in March. This is the season 2 finale. I’ve decided the opening cartoon sequence cartoons probably deserve their own future study. Sonny & Cher sing The Temptations’ song “Get Ready” in yellow and white suit and pantsuit. Cher does hair swings, there are short jokes, mother is fat jokes, sex jokes. Sonny calls Cher a tart. The show is actually pretty good at conversational humor. Sonny gets trumped in a verbal exchange and swivels the dialogue with a “Well, anyway” and this gets a big laugh. Sonny shakes his fist at Cher at one point and they discuss resorting to personal digs when you lose an argument. Sonny shoulder punches Cher and she hits her knuckles into his chin in response.

Cher sings “The Way of Love” in a pink dress with a big flower in her hair. This is her ultimate torch song. There are great camera flares off the flower. This is followed by The S&C stomp, a song and dance about “the craze” of their current popularity. Sonny & Cher lead four sets of Sonny and Cher impersonators in a dance celebrating their quirks and postures: Sonny pointing a finger at Cher, Cher throwing back her hair, their hands on their hip, shoulder socking, Cher folding her arms and giving the cold stare. They sing about the “goombah beat” (another slur on Sonny’s Italianness). They are laughing at themselves, figuratively and literally. It’s early meta and proves why Cher would be great singing Ben Folds Fives “Best Imitation of Myself”  because there is nothing impersonators have ever done with her that was anything she hadn't already parodied about herself first.

Cher’s Vamp dress is red, red and her hair is curly. I’ve always wondered why a vamp theme necessitated pizza parlor laps hanging above the stage. In the Bonnie and Clyde sketch, Merv and Cher play Bonnie and Clyde. Cher sings a provocative intro with “Bonnie shows him how to load his gun.” Merv frets about a prison full of “men, men, men” and Cher says “Sounds like fun.” Cher undresses Sonny and they crack up after a mash-up kiss. In the Theda Bara skit, Cher wears a metal bra identical to the shape of her Take Me Home album breast plates. Sonny makes me crack up when he yells “Oh Sheik!” instead of “Oh Shit!” Six men climb out of an urn to expose Cher’s infidelity and she is not only unapologetic but she talks her way out of it. Sadie Thompaon, Cher’s Mae West, does the same. She says, “I can’t change my ways! I can’t even change a tire!” They make an Arthur Treacher joke I completely didn’t get. 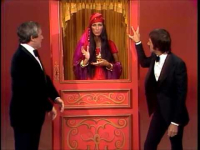 In a Fortune Teller skit (compare Cher 70s teller to the one in 9: The Last Resort), Sonny endures  short jokes while Merv gets delivered Miss Universe. Sonny sings Stevie Wonder’s “For Once in My Life” while photos and video show Cher and Chastity playing on big screens. This is early reality TV. The green screen cuts off the top of Sonny’s head. Sonny & Cher lip sync their hit, "A Cowboy’s Work Is Never Done” with Cher in a bobbed wig, black halter top and fringed skirt. Her rib is sticking out prominently. Sonny has nothing much to do but look tough. I love this song. The line “I play games now but it’s not fun” hangs there in the ether giving the thought time to sink in.

TV Land cuts the Cultural Spot on Vlad the Horror which is a shame because it has a good cameo by Steve Martin in it.