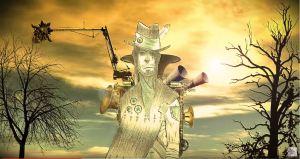 The Internet is great. It gives us Cher coverage in various forms almost constantly. It's become hard to keep up.

There was a "latest Cher Tweet snafu" when she accidentally forwarded a tweet with a penis avatar in it. What's to apologize for this? I don't know but drama did ensue.

Cher Logs Off Twitter After Accidentally Retweeting A Dick Pic

Okay the headlines are hilarious and it gives new punch to the term Freudian Slip. Cher is right: Twitter is unforgiving.  And very funny. Cher is, after all, only human. She's made mistakes. But she's "in command of lost control."

At work one day last week I was in the mood for some "Cowboy’s Work Is Never Done" and since my iPod is a busted mess, I went on to the dark interwebs and found this amazing thing of pronoun weirdness from Diego's Umbrella's 2012 gypsy rock version.

The show ‘Last Man on Earth’ invaded Cher’s house in a latest episode. Spoiler and fragile-fan alert, in the "cameo" clip Cher has passed on to that Bob Mackie closet in the sky. Kristen Schaal is seen below trying on Cher outfits as the group hides out in Cher's Malibu house. I can't really tell but this almost looks like her house. What do you think? 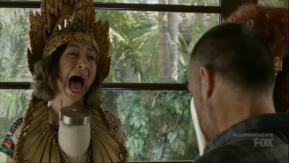 Cher attended the Young World Summit in Ottowa and spoke about elephants and Trumps. Here is video from the UK's Independent and summary text with video from Cher World. 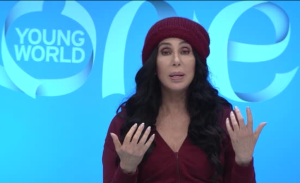 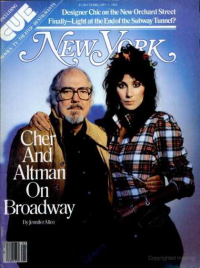 A few weeks back I found this online version of New York Magazine with Cher and Robert Altman on the cover with a story about Come Back to the Five and Dime, Jimmy Dean on Broadway. Read a more in-depth story about Cher's near-death experience with a monster vitamin. Scary.

I thought that was her house as well!