Freak Out: Cher Appearances and Concerts

I’ve been swamped with life stuff, out-of-town visitors, Cher and poetry news, job stuff (went the Edward Tufte conference this week), I threw out my back this week. And now this!

In a surprise announcement, Cher released dates for new live shows at two venues: http://cher.com/#/. If you join the mailing list on her website, you get emails about these things. Las Vegas Weekly also did a story.

She's also been making a flurry of TV appearances of which I have missed 100 percent. Thanks for the heads up, Obama! Why hasn't she been tweeting about this stuff? (There may be a security reason I guess).

Cher Scholar Michael says Cher will will be on The Insider tonight on CBS.

Cher was also on The Today Show this week, interviewed by Maria Shriver. 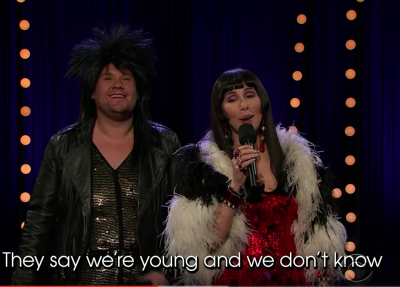 Was on The Late Late Show Thursday night with James Cordon. I haven’t seen a full clip yet but here are partials:

James and Cher singing IGUB. Isn't that a Dressed to Kill Tour-fit?

Everyone is talking about this duet today:

Cher scholar Michael also sent me this episode of The Late Late Show from April that is full of Cher Impersonators from various Cheras.

My friend Coolia also sent me a video this morning of Hillary’s remarks last night from the Al Smith dinner where Cher is mentioned at the minute mark 10:50.

http://www.seattletimes.com/entertainment/cher-talks-donald-trump-emojis-and-american-horror-story/ On James Corden she talked about opening two brand new venues for MGM properties and how she advised them on technical things they should include....
http://www.seattletimes.com/entertainment/cher-talks-donald-trump-emojis-and-american-horror-story/