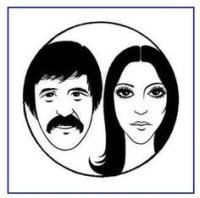 Okay this may get monotonous, but I've never had a blog before while Sonny & Cher shows were airing. So I'm going to try to recap them.

First of all, these shows are airing with terrible commercials (Tom Selleck...ugh). I'm trying to figure out the demographic and all I'm coming up with is 'old people.' Of which I am now one because I'm watching all these old GetTV and MeTV shows, particularly enjoying Barney Miller.

The first episode turned out to be the actual first episode with Jimmy Durante from August 1971. I was hoping GetTV would show these episodes in order. But they aren't. The second episode already jumps to Season 2 in 1972.

But from the very first episode you can see that all the iconic elements are present: the hands on the hip, the pointing at each other, Sonny tapping Cher’s nose, the nose jokes, the Italian jokes, the sexual innuendos, (Cher can make any line sound naughty. She says to Jimmy Durrante when the gramophone prop horn falls off, "Why look, my horn fell off."), the awesome lenses flares, the lip licking, the lusty belting out of solos, the hanging hand, the hair flip, Sonny sticking his hand in Cher’s face as they say goodnight. Bob Mackie and Ret Turner are also there from the start. t’s all there from the beginning. And the show even begins with their nightclub banter from their Live LP of 1971 (right).

Sonny also does something interesting after their initial duet of “The Beat Goes On” ("Hot pants are the current thing, uh-huh"). He announces an official beginning to the show already 5 minutes in, something Cher still does in her live shows.

GetTV episodes are also not complete episodes. And, as it turns out, neither were the  TV Land airings. It's like a shrinking can of tomato sauce, we get so much less product these days with all the added commercials mixed in. The TV Land airing cut out their inaugural "In Concert" duet of “United We Stand" and "Suspicious Minds.” GetTV included that duet but cut the Cultural Spot of commercial spoofs.

Many of the recurring features were also present in episode one: the torch song, the vamp segments, (although this inaugural Vamp contains a prologue song called "Woman Is" that is both pretty and pretty dated), Cher is also already being fashioned into a femme fetal.

Song links: "You Made Me Love You" with a typical, lusty blues interlude and her first afro-extension. There is also a blurry, bad-quality full version of the show online. Here is one piece of it that shows "Woman Is." 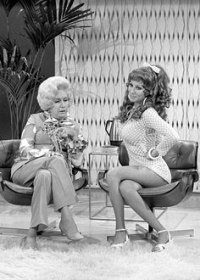 Week 2 was from the second season, with Mike Connors and Jean Stapleton, and the opening dialogue includes the fact that Cher made a list of the 10 best dressed women that year. Crossed arms, the deadpan looks, short jokes--more iconic gestures. The solo spot really highlights the red circle of light that hangs like a blood moon. Cher is practically howling to it.

There are two missing skits in the GetTV airing, Jean dancing with Cher and a skit called Meet the Candidate, which I remember liking, (you can see those here with a Gypsy Fortune Teller skit). The odd "Bono Award" is introduced here. I still don't know what that thing is visually. I'll try to take a screen shot of it. Awards go to daytime TV shows such as General Hospital and the Galloping Gourmet (I loved watching old episodes of this on The Cooking Channel back in 2009).

Another award goes to “the most cooperative contestant on the Dating Game” and Teri Garr comes out pregnant. Yikes!

Cher plays a great dumb redheaded starlet in a talk show skit (see left pic) and the concert duets are always exciting with the microphones, the full band and the light banks. In this episode, they sing "United We Stand" and "1-2-3," a Len Barry cover I looked up today. Hullabalo dancing always cracks me up. It’s so abrupt.

Spoofing The Carol Burnett Show, Sonny & Cher ask audience questions. One of the cast members pretends to ask them a question about how they started out and they launch into The Sonny & Cher Story, a mostly fictional skit about how Cher’s mother (Jean Stapleton) and their manager (Mike Connors) helped them rise from prom-band folk singers to glamour goons in Las Vegas to having their own television show where they have “50 million fans.” It brings to mind the many fictional elements in the Sonny and Cher mythology that had been provided up to that time. Steve Martin and Bob Einstein are in the writers room by February 1972 and seven months later you can really tell Cher has gained confidence and conviction in her performances.

Link to songs: People Got To Be Free and Body and Soul.

I didn't think Mackie was designing in episode one! Huh! They are really wonderful though - this is where the real CHER magic was created .......

I didn't think so either but he's definitely listed in the credits.