Are You Cher Music or Cher TV?
Chaz Bono on American Horror Story and The Sonny & Cher House

I took a class in electronic literature this spring and we did play-throughs, those videos that show another player going through games so you don’t have to, for particularly literary video games. I loved the play-throughs. They're so much easier.

So this inspired me to look for play-through video for 9: The Last Resort, the Tribeca Interactive game Cher did voice-over work for in back in 1996. I never finished the game but now I sorta did!

Iconoclast187 is the player’s name and oddly he lists the celebrities voice-overs for the game, including ones that aren’t listed in the credits and don’t sound like who he says they are (Ellen Degeneres and Anne Heche). But at no point does he ever mentions Cher as doing the voice for Isadora, the mechanical gypsy fortune teller. Sound familiar? Is this legally typecasting?

It was kind of mesmerizing watching the play-through actually, although the Iconoclast187 is very snarky about the shortcomings of the game (about which I tended to agree...so much so that I stopped playing it 30 minutes in). He says things like, “That was certainly a collection of words” when he is aggrieved by the lack of clues in a long, Isadora speech. He seems to hate it when the game gets too easy or too hard.

This is the type of old computer game where you can only carry one thing at a time and you must complete tasks in a certain order, (and order completely unknown to you). God bless 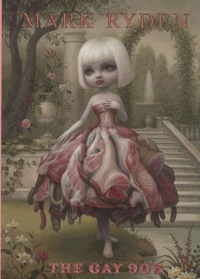 Iconoclast187 for sticking with it.

A lot of the story deals with themes on music with puzzles involving notes. There’s a very weird song at the end that thankfully Cher doesn’t sing.

Wikipedia states “The gameplay, coupled with the extremely high hardware requirements and the high cost of the game led to very few sales, and the game was remaindered… The name "9" refers to the nine muses which inhabit the resort (from Greek mythology). The muses are represented by various characters in the game."

Just so you know, Chaz Bono is in American Horror Story: Roanoke. It just premiered tonight and when I saw him I immediately recognized. Now I'm wondering if Cher is watching too

Awesome!! Thanks for the tip. Check out this story...looks like Cher is aware: http://www.newnownext.com/chaz-bono-american-horror-story/09/2016/