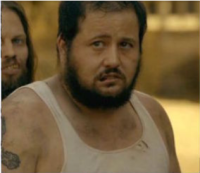 Chaz Bono is on American Horror Story this season as a recurring character. I know, I know. Two episodes have already aired! But isn't everyone just waiting to binge-watch the show on Netflix anyway? Besides, it was a big secret and nobody knew until after the first episode and then my carpel tunnel flared up and I wasn't blogging so you'll just have to deal with the reruns and the recaps if you haven't been DVRing the show already. Life is heartbreaking that way.

Read about the surprise or read through the recaps.

Did you know there's a "Cher for American Horror Story" Facebook page? Neither did I. I can't really picture this happening.

In other news, the most famous Sonny & Cher house, Owlwood, just resold again. Is that thing haunted?

Here are the stories. The fact that Sonny & Cher once lived in it seems like the lead point, because they're such hasbeens and all. Notice the buried mentions of Tony Curtis and other owners. I freaking love this house! Take the drone tour. Can't you just see Sonny chasing Chastity around the pool? Another thing you might notice about this house, it has such a personality of its own, it looks pretty similar now to how it did when Sonny & Cher were in there and decorating it with Ron Wilson. Notice the bedroom mouldings, the print curtains. See for yourself in this nostalgic tour of Cher's past homes.