Goddess of Pop and Other Royal Titles
Election Tweets, the Tabloids, I Paralyze and the Importance of a Good Wig

The Best of Vacation Times, The Worst of Twitter Times 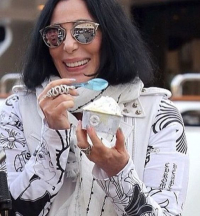 It's an ice cream vacation and Daily Mail is stalking Cher through every spoonful.

However, there have been some funny titles about Cher's vacation in light of recent rumors and events:

Cher shows off her fit physique at 70 years old

Cher vacations in Italy amid reports that she’s dying, broke and alone

If you’re a fan of The Walking Dead, (and I was for like three episodes before I dropped out realizing the thing was a soap opera), you might be surprised to know that Norman Reedus has come out saying his number one choice to ride bikes across America with is Cher: http://www.cinemablend.com/television/Celebrity-Norman-Reedus-Wants-Ride-With-Most-Who-You-Guess-143557.html

Cher is still working for our elephant friends.

Cher got flack this week for her tweet about the UK vote to leave the European Union.

Obviously her initial tweet emoticon was misinterpreted. She never "appeared to back the vote and then regretted it." At least if you can read a tweet. She says literally "Pray it's best decision" but if you ignore the praying hands emojii, (is there such a thing as emoji blindness?), it looks like she's saying "It's the best decision." I guess this is why emoticons aren’t admissible in legal documents. It does surprise me that Twitter Followers can't follow.

Drama #2: Then there was the bomb emoji drama which included the words "Cher slammed" in many online article titles.

She's literally saying: "We all pray for innocent people in Turkey airport. Bomb explosion." But I get it: (cartoon bomb ≠ real bomb) = insensitive. Terrorism isn’t a loony toon after all. So I guess a few severed limb emojis are not appropriate either. Hey, dark days call for dark-humor emojis.

But this, my Cher friends and Cher Twitter "followers," is what we call a language problem over in literary-theory land; and some kid will soon be doing a college dissertation on it, if we should be so lucky. Emojis are in fact so new, it’s hard to know officially which of them can officially classified as useful or inappropriate. But Cher seems willing to be the leading test case on the issue.

My beef with emojis is that they evolved from emoticons like this :-/ (which, because I’m old-school, I still use), a system of willfully misusing punctuation marks in order to insert some added layer of emotion into the deadpan language of email communications, (“Is he trying to being a dick with that comment?”), where in olden days people found it hard to decipher contextual humor or anger or sarcasms or winks or any other kind of extreme feeling in email missives and misunderstandings consistently arose, friendships ended,  wars ensued, and jokes failed.

These days artists are paid (or not) to create little cartoon pictures for us to communicate with instead of us having to use those pesky little Latin letters or instead of getting paid to, say, solve world problems or teach children to communicate better in emails without the aid of stupid little cartoons and then get offended when some celebrity doesn’t use the little pictures right which ironically was a problem the little cartoons (via the misuse of punctuation) was supposed to freaking solve in the first place!

Posted at 08:04 AM in Cher News, Peripherals, What This Really Says About Me | Permalink | Comments (0)