Someone on the Yahoo! Cher group posted this Blank on Blank cartoon today from an interview Cher gave in 1999. It's very cute, creative and actually a great, candid interview.

Most interestingly she says, "Gay men understand not being part of the whole" and that's why they relate to her. I think this idea of mass popularity or fitting in as being "the whole" is very interesting conceptually.

Anyway, what I love about this cartoon is that it reminds me of the 2010 Serge Gainsbourg movie, Gainsbourg: A Heroic Life which I love and was based on a graphic novel by its director, Joann Sfar. This is the kind of creative movie biography I hope Cher gets someday, artful, surreal and letting the animation provide some emotional punch. 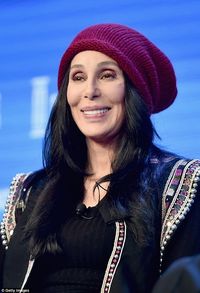 Cher spoke at the Milken Institute Global Conference last week. Of course her hobo hat stole the show and not what she had to say.

Well, that's not entirely true. Billboard Magazine did focus on some of her anti-government comments and other comments around the Flint water crisis in Michigan.

From the story: “Nearly 90% of venture capitalists are male. If Wilkis Wilson’s statement is true, and a vast majority of VCs refuse to see the market potential of markets focused on diverse audiences, female founders targeting female customers are doomed.”