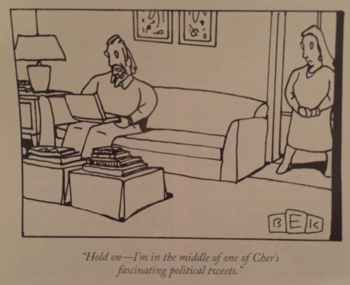 So…my trip to LA was good. I went to two conferences, the Los Angeles Time Book Festival at USC and a Google Analytics workshop for CNM. But I got sick the first day with the stomach flu and that was pretty much my week. Then everything-and-his-Uncle fell apart when I got home. Oh, and I got sick again with a nasty head flu. C’est La Vie.

Cher has been a tweetin' and a hollarin' in the meantime. Here’s a recap:

By the way, it makes me crazy that people send hate tweets to each other. As one woman put it to Norman Goldman a few weeks ago, “Sending angry tweets isn’t political activism.” So it was enlightening to come across this great Guardian article on hate comments.

Cher keeps the heat on Trump 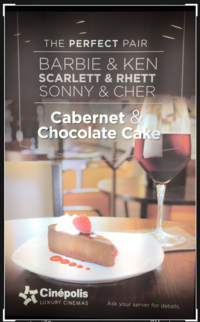 Cher tweeted the above New Yorker cartoon this month and this Cabernet and Cake sign.

This is an absolutely a great piece (don’t miss the trailer at the bottom) on Come Back to the Five and Dime, Jimmy Dean and celebrity obsession.

There's a new Cher museum in Salem, Massachusetts. Coolia sent this to me. Sounds like a good time for a road-trip Cher quest!

I also found this video footage of another Cher museum! Someone should develop a Cher museum app for these things!

Cher tweeted about being scheduled to speak at the Milken Conference:

I used to work for Mike Milken. In fact I worked at his Prostate Cancer Foundation, (upstairs from the Milken Institute), when Cher performed for his PCF fundraiser during her Farewell Tour, in between those many faux-final shows. Here's detail about the event. I hope some think-tank braniac attends this and tells us how it goes.

The Cher musical is continuing to make news like it just might grow up to be something someday.

mary,
you are such the 'gat about'...
loveandkisses
me