The Bloids and Celebrity Abduction

Sooo…a tabloid story did come out, I guess, although it wasn’t The Enquirer. It was Radar.online claiming that Cher has been brainwashed, drugged and put “under the spell” of someone close to her. And then there was this denial story which seemed as implausible for some reason as the original story.

But the stranger part was that last week a similar story cropped up that Richard Simmons was similarly being held hostage in his own house because he hasn’t been seen in public in over two years. In that story Richard Simmons phoned in to tell Entertainment Tonight that he was fine and had recently had knee surgery. Interestingly he refrained from including a photo.

So here are a few takeaways for us:

Cher seems to be feisty and fine, however, as these Twitter stories suggest:

Here's Richard Simmons back in the early 1980s. I wrote him a letter about my eleven-year old dreams of distinction in grade-school chorus.

Sonny & Cher on the Newsstands 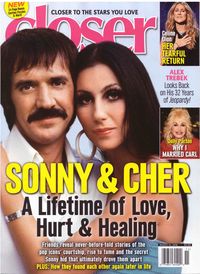 I received a message from Cher scholar Robrt last Saturday while out shopping for next weekends family reunion, (my third in so many years). He said it was suddenly 1975 on the newsstand again!  And sure enough, Sonny & Cher are sitting by the checkout stacks right alongside Blake Shelton and Gwen Stefani. Do the millennials even know who Sonny is?

It's a brief story in Closer about the history of their relationship. It's pretty well summed up for such a short piece. With all the hubub going on with Cher's Twitter posts last week and talk of nasty tabloids, those hemorrhoids of journalism, I was confused about whether I should even purchase a magazine called Closer. Was it a tabloid? Closer Weekly in UK sure seems to be by all accounts of my Google searches.

But my perusal of Closer so far leads me to think it's made up of mostly soft-stories about celebrities. There's nothing erroneous in this S&C piece. Nothing new either. Just some quotes from biographer Taraborelli, and old co-worker Hal Blaine. They even dug out Cher show producer George Schlatter commentary. The story that follows is a equally soft piece about Dolly Parton, the boon there being an elusive picture of husband Carl Dean.

If you pick up a copy and read it, you'll surely come to see what an amazing art newsstand cover copy really is.

Top 40 website also did a list of Top 10 Cher songs. I beg to differ with some of these.  It feels more like a reshuffling of her hits.

It seems like tabloid web pages are the only outlets really running on this Twitter story. Although Cher did do some cryptic tweet ranting last week so who knows. It feels like a personal story (Twitter release all the same) and I debated even bringing it up here except that it bears commentary on how creepy fandom can be. In that it's creepy to be an uber-fan, even a well-behaved sort and when you read stories about creepier fans, unhinged fans or entitled fans, or even just the roach-ridden underbelly of show business, it's so not fun and makes you question whether or not you should be reading Infinite Jest faster (I've started a reading group!) or devoted more of your life to poetry. That is until the poets and their back-biting competitive infighting starts to depress you and you begin to question maybe whether you should be listening to more Cher records and working to finally launch that Chersonian Institute.