Snuff Garrett and the Cher Brand
Sonny & Cher on the Newsstands

Chaz on OWN, The Leopard Moment, Feminist Anita Sarkeesian

Mr. Cher Scholar and I have been home sick for the past two weekends. So it was a home-bound surprise to find that my DVR had taped Chaz on Oprah’s Where are they Now? show (first air date: 2/6/206) a few weekends ago. Chaz looked good, talked about new ventures including a clip from a new movie. Orpah and Chaz also had further discussion on life before and after transitioning and whether Chaz’s experience reading as a woman gives him any insight into that gender (spoiler: no it did not). There was also an update in regard to his relationship with his mom (sounds much better).

Disappointingly, I find Chaz can be kind of Sonny-ish on the topic of women. Interviewers probably set him up for this, as if to say “you’re a man now…say something sexist!” For instance, his example about not understanding women involved a comment about how they are so mysteriously offended all the time. He still doesn’t have any more insight into that.

How many stoic women do I know in relationships? A lot. How many men do I know who get easily offended, much more so than their wives and are uncommunicative about why? A lot.  I’ve never heard Mr. Cher Scholar say anything like this. I rarely, if ever, hear my contemporary male friends say this about their spouses. I don't think I've even every heard my Dad make a comment like that. But I have heard some of my friends with same-sex partners complain about it with their partners. The issue seems to defy sex and has more to do with character and relationship dynamics. So it’s kind of an guy trope, this thing complaining about how sensitive women are, and an old-man trope at that.

Having read as a woman for so long should have provided Chaz with some insight into the idea of, shall we call it, female hysterics, simply for the fact of possibly once being erroneously accused of it. I simply don’t buy the idea that you’re born with male prejudices. You opt to have them. Maybe I know some extraordinary guys. Chaz has the option to be an extraordinary guy.

The episode also included an awesome update on Linda Blair where she revisits her feelings about The Exorcist. As you know, William Friedkin is one of our peripherals here because his directorial debut was the Sonny & Cher epic Good Times. In just over a decade he would go on to make his most iconic classic. I still maintain that if you carve out all the gore and bugaboo from this movie, the scenes are quietly and delicately constructed. It would seem Linda has made peace with that movie and is also working an adorably furry charity venture. Her eyes still creep me out a bit though! Watch the show’s trailer: https://www.youtube.com/watch?v=31SUgyocMZo. 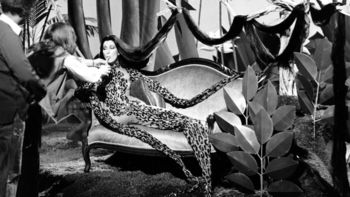 Remember the scene in Cher and Other Fantasies  where they tie Cher's hair and outfit up into a tree? A good tribute to that popped up online last week.  I love how Cher specials are getting some well-deserved revisionist love.

Fashion is a form of ugliness so intolerable that we have to alter it every six months.

There's also a great new interview/dialogue between Cher and Zendaya where they talk about girl power and fashion as empowerment. Great candid and friendly tone from Cher.

Every few years my nieces or nephews will solicit me for magazines subscriptions for school fundraisers. I always purchase Time Magazine for a year and then spend three years reading it in the privy. In one issue from 2015 I recently came across a familiar name in their most influential people list: Sarkeesian. It’s only one letter away from Sarkesian! Amazingly I’ve been reading about this woman for years but have never put a name to a story! From Time:

Anita Sarkeesian, 31 year old activist  and gaming feminist advocate, one of Time’s 2015 most influential people. She became the “target of vicious, misogynist harassment, death and rape threats and pornographic vandalism on her Wikipedia page and an effort to have her Kickstarted flagged as terrorism. All of this because she wanted to have a conversation about the way women are portrayed in video games. Anita is just the latest women writer to prove the law coined by journalist Helen Lewis: that the sexist comments onany article about feminism justify feminism…Anita has refused to back down…As her detractors grow increasingly unhinged, we have proof that her efforts are working.” Written by Wil Wheaton.

Anita is actually Canadian but she went to college at Northridge in the Los Angeles area. She is the other Sarkesian you should be following. Wow. I never thought I’d have occasion to say that.If you don’t think we are still in need of feminists in the new millennium, just read her Wikipedia page.

Posted at 07:58 AM in History, I Am Not My Hair (Inner Beauty), Peripherals, Television | Permalink | Comments (0)