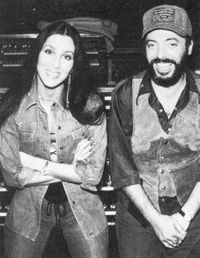 So I heard a rumor from Cher scholar Robrt that around December 18 Snuff Garrett had passed away. I did a short search for online obituaries that day but couldn’t find anything and then I went on a two-week vacation. I finally rechecked and indeed Snuff Garrett did pass away on Dec 16 or 17 depending upon the article. The New York Times obit says Dec 16 so let’s go with that.

We’ve lost many to cancer in December and January and I’m feeling somewhat soul depleted already; but I'm taking Snuff Garrett's passing especially hard. Over the last few years I've been having a bad feeling that we wouldn't have him around for long to discuss Cher history and this was a most important Cher record producer (beyond Sonny) who didn’t get nearly enough credit for shaping her image in the early to mid 1970s.

Image may be king but music moves the heavens.

However, I want to do a more considered post about Garrett than I’m prepared to do now. More later. In the meantime, here are some of his obits:

1. When, I first looked at this post on CherScholar, my eyes read the words , BUT, my brain focused
on the PIC and I thought, "OH, MY GOD.... DAVID GEFFEN DIED." AND, then, I thought, 'Now, I will
never be his boy-toy.' 'I wonder what cher is going through?'

2. I am saddened... I agree with Mary. It is a shame that we will never know Snuff Garrett's story.
about cher and sonny and cher, BUT, more importantly, his story on showbiz and the musicbiz.
HE WAS and IS more than people will ever know in the world of creativity concerning showbiz.
I remember he said that Cher was NOT a singer; but, a song stylist. I believe that and he was the
first to recognize and say it.

3. I AM saddened that MY pop-culture world has, recently, and just, recently, begun to DIE!
Glenn Fry and Abe Vagota(ms) and others just this week...
This past weekend I watched the 3 hour+ documentary on NETFLIX(chill pill here.. I am the only
subscriber whom has never had a problem with them) ON THE EAGLES......

4. Eventually, in my Creative Writing class this semester we will do poems.... I want to write a
poem about the death of my pop cultureness..... I am thinking of just naming names.

5. I have YOUTUBE on my new Roku3 now... and I have been watching people from my
popcultureness.... Aretha has gotten SO old and SO have others... Dionne Warwicke, etc....

6. I have decided to start a savings account for cher.... so, that, when she causes the Stars to
Shine a little less brighter.... I can get on a plane and head to LA and be with all the other Fans
on Hollywood Blvd and in Malibu....

JDP you got me started on Netflix. Good point about Snuff and Cher as a stylist.

I should, also, say Dolly and Rosanne Cash are getting old.

AND, everytime, I watch Whitney and KAREN CARPENTER ON youtube, I just want to cry at the lost
of such talent for such unbelievable reasons.

On the other hand, I have been watching moments of Oprah on Youtube, where she did interviews
with celebs about where are they now or their tell-all rags to riches-----

AND, I must say, I was jealous and angry! I understand that The Judds and Tina Turner worked
hard and went through their own shit along the way, BUT, as a FAN, I think: "So, yes, now they
retire to a life of Nirvana(as Tina described it, where she no longer DESIRES anything and now
knows a happiness she never knew was called happy.) Of course, she states that she has it all
(meaning the material/money). The Judds bought a 1000 acres and the 3 of them have a place
called Peaceful Valley, with their own separate palatial residences and out-door nature of all kinds.
How wonderful for them. BUT, where are their FANS now??? What kind of Nirvana did they end up
with? Infact, Oprah, supposedly, just bought a $14 million compound in Colorado that elevated her
into the sky, with outdoor walkways that go everywhere and she is in the tree tops, NOT ON THE
GROUND.

As a FAN, I feel I got the short end of the deal... All those years of support and love and
worship for them... where is my Nirvana from this LONG relationship???
I know that it sounds werid to say this, BUT, really... I wonder how do other fans feel about
their own decades of hero-worship(which took time, money, etc from their lives) to see their heros living the Nirvana good life and you are not?

Maybe, this makes no sense at all, but, I how DO other FANS feel about this sometimes?

This doesn't bother me personally. I mean Cher could conceivably say the same thing about the CEO of Dr. Pepper: "I'm been a fan so long and given them so much money....why is he so rich and I've got cavities!" The capitalist culture transaction is a pretty simple one: you hand over the money, you get the soda, CD, movie, tv show. End of transaction. If you think the people at the top get too rich in the scheme, you have a very simple solution, don't buy it/don't contribute to it. I, myself, have exercised this option with many products and companies. You decide how you want to spend your time and money and love. But time and love is nonrefundable so CHOOSE WISELY.

I guess I still say: "THERE IS something wrong here. I guess I am saying it about hero-worship(and
at the age of 55; maybe I have come to realize: "WHY did I think these people were so important?
Obiviously, they DID NOT see our relationship the same way I did... I guess I was naieve(ms)... I
guess I was guillabe(ms).... I guess I pinned my hopes and dreams and disappointments on HEROS
that DID NOT exist, except, through the MEDIA Machine and FAN CLUBS...... I BEACAME ADDICTED TO SOMETHING THAT WAS ONE SIDED AND WASN'T REAL.... EXCEPT, IN MY MIND....LIKE AN UNREQUITED(ms) LOVE....

maybe people like sonnyandcher ARE no better than a "USED CAR SALESMAN" or a
"POLITCIAN"?????
STILL, I will CRY when she is gone; BUT, I think I will, then, love and appreciate HER more....

I want to add "EVANGELIST"(ms) to the 'used car salesman' and 'poilitician'...

one more post:
and, I would love to debate this with people:

I am a dreamer and I truly believe in magic in things and people(whatever all that means)... BUT, the longer I live
I come to realize that is NOT the case.... the world as I do my best to see it...IS NOT how most
others around me view it..... WHAT DOES THAT DO TO THE MAGIC, THE GOODNESS?????
I GET so tired of trying to keep it ALIVE.... WHEN others NO longer feel it at ALL!

OMG, this needs to be on MY OWN personal BLOG and NOT MARYS'....

MaryElizabeth,
lets do lunch...
loveandkisses
me.