Taking a break from the holiday break to express my glee over the fact that the Sonny & Cher song "Little Man" is being now featured in a very funny Amazon Prime ad. Mr. Cher Scholar said he saw the commercial first during football last Sunday. "Why didn't you alert Cher Scholar?" Cher Scholar asked. Apparently he had the sound turned down. Hmm.

In any case, I saw the commercial last night on A&E and flipped! 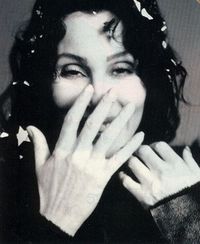 Happy holidays to all the Cher Zombies out there. This is my last blog post of the year! We’re coming up on my Christmas break and my somewhat bi-annual Christmas party. I’ll spend some time off CNM working on book and web site projects.

What would a blog week be without some Cher Twitter kerfuffles?

Cher also recently did the voice over for a Sierra Club video that just came out. You can read about it and see the video at Mother Jones:

"Now, Cher is lending her famous voice to the fight for a better, cleaner world, in an innovative virtual-reality tour of China's environmental emergency published by the Sierra Club on Monday. Throughout the short video, Cher explains how China has become the world's leading emitter of carbon dioxide, and how putrid air filled with poisonous sulfur leads to 4,000 premature deaths every day in China (true), and two birth defects every minute (also true, but a pretty old statistic at this point)."

Mother Jones also does a play-by-play of the video's stated facts. I love their graphic of Cher on their web page with a hard hat, although it's a tad condescending.

It's a timely launch of the video, however, because Tuesday New York Times just reported this:

"Airpocalypse: Officials in Beijing have declared that the thick smog blanketing the city was bad enough to require a red alert, the first time they have raised the alarm to its highest level, angering and confusing residents."

The Sierra Club video story in also in Eco-watch.

Not to be confused with the big house, this is a former house of Cher’s which is back on the market for a paltry $10 million dollars.

Rolling Stone Magazine has been giving Cher some love lately. Previously they posted her tour-de-force video from 1978 with Dolly Parton. This week they posted her holiday duet on Glen Campbell’s variety show from 1969. They sing "Jingle Bells." Cher really rips the seams out of the song in parts and alternatively seems a bit unsure about the arrangement, which should sound familiar to us because it's the same one Cher did with Sonny on their variety shows. At the end, Glen Campbell jokes about "locking Marty Paich up in a basement for a week to get that arrangement."

Better yet, there are more great Glen and Cher duets to be found on YouTube:

News came out recently that George W. Bush once thought rock singer Bono from the band U2 was the same Bono who was once married to Cher. I guess that might be confusing if you hadn’t lived through the 1970s or the 1980s. But wait...

I guess this isn't any worse than Cher once thinking the moon was the other side of the sun. I guess we have to let this one slide.

Chaz was recently spotted with a date at The Danish Girl premiere.