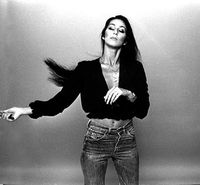 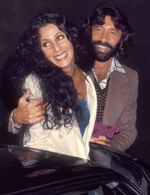 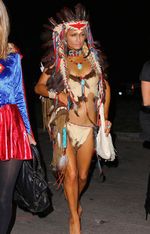 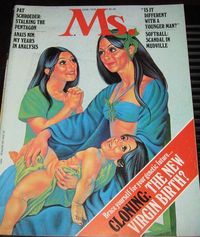 A few years ago on a visit to NYC I met with Cher scholar Dishy at his house in Brooklyn. He showed me some thing in his Cher collection, including a 1976 Ms. Magazine with cartoon drawings of Cher on its cover: a contemporary Cher with her butterfly dress she wore to the 1974 Grammy awards, a teen Cher in a green t-shirt and a fat baby Cher swaddled in a blanket. Not only had I never seen this thing before, but I was intrigued by it. I finally found my own copy last week.

First let me catalog some interesting things I found in this Ms. Magazine. It’s always fun to look back through old magazines, page by page, to chuckle over the advertisements, the formats and the photos.

There was an interesting column bemoaning Heloise and her household hints with the call-out text noting that 50 years of cleaning convenience has given us, disturbingly, an increase in hours spent on housework. It’s hard to believe that we spend less time doing housework in total for the simple reason we no longer have to chop wood 365. But aside from this, I’m also inclined to believe this has as much to do with conspicuous American consumption (more stuff to clean) as it did with 1950s anti-feminist propaganda (and the idea of the super housewife). But the whole conversation is interesting to me in light of how Bust Magazine and 3rd-wave feminist writers redefined housework in the 1990s and 2000s, the resurgence of knitting and some of the kitchen arts. I think the 1970s feminists were very right to question the idea that women were made to do housework. However, the issue did evolve.

I also found a very interesting news item on the first female National Union head Grace Hartman. I looked her up and if you’re interested in her story, here it is: http://womensuffrage.org/?p=22379

I’m not too familiar with Ms. Magazine so I had never heard of their somewhat famous column in the back of the magazine called “No Comment” where readers send in disturbingly (and laughable) sexists ads and press clippings. Ms. is still doing the No Comment column. You can search their recent archive. The results are much more subtle but also more violent. The old-school no-comments are strictly jaw-dropping in their obviousness. It’s definitely worth your time to pick up old issues in order to read these.

Did you know you could buy a Rabbit car in 1976 for $3.500? There were also WAY lots of booze ads in this issue…like hard alcohol ads dominated the advertising. What’s up with that? I also spotted the beginnings of the Age of Narcissism advertising in the Ultra Ban Roll-on ad: “It’s right for me!” Or crazy promises of consumption in the “I Found It” ad for Happiness Foam-in hair color. Am I finding hair color or am I finding happiness? Because we know they’re not the same, right?

There’s an article in this issued titled, (I kid you not), “Can a 40 year old woman find happiness with 29 year-old man?” Uncanny.

But back to the Cher cover. What did it mean? The cover art was done by Melinda Bordelon (1949-1995) and it references a cover article on genetics by Caryl Rivers titled “Cloning: the New Virgin Birth.” It just bugged me, this cover. What the hell could genetics have to do with Cher? I mean culturally it bothered me. Because I felt certain it couldn’t be good. Although I had no desire to read a very dry article on genetics from 1976, I felt I needed to explicate this situation. I was an English Lit major…it’s what I do. 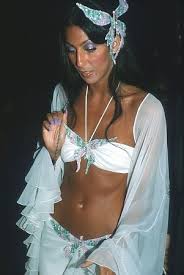 First of all, the cover cartoon really captures Cher-face full of delight circa 1964, a somewhat child-like Cher. Interesting choice considering 1976 Cher was very different from both her deadpan, sophisticate face or the more accommodating yet hipster Cher-Show face. But Bordelon captured the big eyelashes, dark eye shadow, and thin eyebrows. Bordelon gave her straighter teeth. By the way, that butterfly dress from the 1974 is still having an impression. I found it in this fashions list of the best Grammy dresses (including the famous green Jennifer Lopez dress that launched Google Images.

The genetics article itself mostly describes nightmare scenarios about in vitro fertilization. You know, because this was back when everyone was alarmed by the idea of “test tube babies.” The author provides scenarios where the poor could be forced to sell their uteruses for food money: “It wouldn’t be the first time that poor women found that their bodies are their one salable commodity.” The author also talks about selective abortions from the results of amniocentesis testing for Down’s Syndrome; in other words, aborting due to sex-of-baby results.

Forty-years later we can see that none of this came to pass. You could argue in vitrio has even liberated some women who wanted children but were fed up with bad relationships. It’s also allowed same-sex couples to become parents and, over all these years, prove their parenting skills.

Nothing remotely in that article could be tied to Cher, but there’s a side panel story on issues surrounding cloning. Unlike the in vitro article, some of Rivers' points are still relevant for many people today. And here is where I found the connection to the cover art:

“The misuses on cloning aren’t hard to predict [and the author discusses dictators controlling their regimes after death through cloning]. “Would women and men project their egos into the future by producing their own ‘carbon copies?’ Would society choose to clone our most valued citizens? Artists…?”

There it is! Multiple Chers! Here I must stop the press and beg to differ! Because if the decades have shown us anything, it is that there can be only one Cher!

In these articles, Rivers is concerned that cloning and in vitrio progress concerns women but that women and minorities were not included in the high-level decisions being made about them, which was no doubt true.

So I don’t mean to fully dismiss the point of view in this article. It feels very patriarchy-obsessed looking back (I mean, the fear of cloned dictators?). But that was fully the point. Back then, the patriarchy did control everything. And it’s because of the good work of the 2nd-wave feminists that I had the more pleasant opportunity to work in a reality that incorporated more female leadership, female decision-making and female opinion-expressing, and I found all of it outside of Ms. Magazine.

Cher and Trump, an MMA Fighter, the Super Bowl, and Who is this Cher Person? 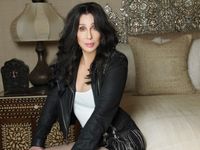 I recently updated my friend at work about Cher’s history of feuds with Donald Trump. Here are the links I used:

This week Cher tweeted to free an MMA fighter from suspension:

Want Cher to headline the US NFL Super Bowl? Sign the petition: