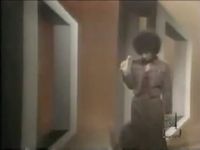 This finishes my recap of Cher-shenanigans over the last month.

Someone recently sent in a question to Cher scholar asking for information on Cher's appearances on old Mike Douglas episodes, specifically with the Elijah. They sent me this photo link.

early 1970s. Cher’s office attire hearkens back to her 1978 skit on Cher…Special.

Do you ever ponder what Cher means when she calls you Bitch. I often do; but I think for Cher the term Bitch is somewhat synonymous with Chica, more lighthearted than insulting. Am I wrong about that? Am I just being one stupid bitch? In any case, one Irish fan is confused.

Cher made an anniversary tweet  on June 28 marking her 50 years in entertainment.

By the way, Richie Sambora, (the old fling), just released a cover of "I Got You Babe."

Harper’s Bazaar has just published an ode to Cher’s Twittering. 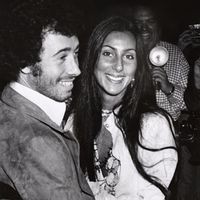 My friend Christopher just sent me this link to an article about David Geffen selling his Malibu house in which is referred to as "music/film mogul and Cher ex." In light of Geffen's mogulry, Christopher found this extraordinary, saying,

"I thought you would appreciate how in this article on one of the biggest power brokers in Hollywood, they choose to give equal weight to his identity as the ex-lover of Cher as they do his epic accomplishments as a "music/film mogul," making that relationship so central to his identity, even though he has identified as gay for several decades and the bisexual fling with Cher was almost forty years ago.

It either speaks to the supreme importance one can gain via association with Cher, or the reporter's mistrust of readers' knowledge of what a significant industry force Geffen is.

As she inches ever closer to the BIG 7-0, yet still more of the world revolves around Cher than she may realize."

Chaz Bono and Caitlyn Jenner: Are They Friends or Fuedin?

In Billboard, Chaz gives support but would rather talk about his acting career.

In Starpulse, it's all jealousies and mayhem. 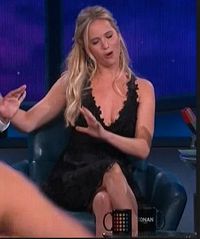 Jennifer Lawrence Does a Cher impression

If you remember, my parents think Lawrence is very Cherlike. But I don't think this proves it. 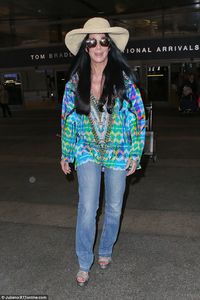 I'm back from vacation. Back from a New Mexico family reunion (where there were 93 of us). Back from catching up on CNM projects. And there's so very much to catch up on. So much time has passed. Have we all changed?

Donald Trump has been busy making a mockery of a fiasco. Bobby Kristina is no longer with us. Oft-mentioned friend of Sonny Bono, Dick Van Patten, has passed on. There’s so much to cover, I’ll have to do take it in chunks. Today's chunk is a roundup of links regarding Cher appearances and music news.

The rags have been busy proclaiming Cher's impending demise and her heavenly return to Sonny. That this tactic is even still in use tells us how much Sonny & Cher still maintain a hold on the national fantastical imagination.

Cher's cover of Love Magazine is out but it's hard to find. Cher 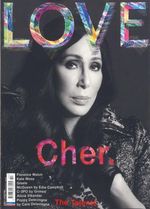 scholar Dishy in New York City tells me her cover is even hard to find on newsstands in the city! I guess the problem is she shares the cover with other talents. And surprise, surprise! Her face is on the cover! (Click the photo to enlarge.)

Cher made a few trips recently and one magazine had all the dets!

Daily Mail said, "Can you Believe she's 69? Cher turns heads in skintight bodysuit and eclectic jacket as she departs from LAX." (Click the link for pics.)

Daily Mail also said in another piece that Cher could turn back time in hippy bell bottoms. (Click the link for pics.) 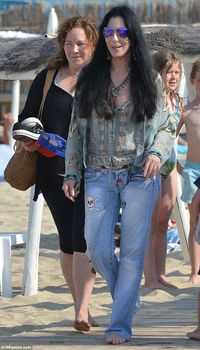 Then the Daily Mail posted pics of Cher walking barefoot in St. Tropez. And then even more pics of barefoot walking! (Click the links for pics.)

Then they posted more pics of Cher in see-through pants.  (Click the link for pics.)

If you'd like to see a roundup of all the people involved in the new Marc Jacobs fashion campaign, this site has it.

And here is another website that has taken on the task of reviewing Cher's most outrageous outfits! It's so subjective.

Musician and arranger Harold Battiste has passed away in New Orleans. He received an obit in The New York Times. The article uses a photo of Battiste with Sonny & Cher (as their long-time arranger and musical director) to lead the story.

Someone has started a Facebook page to get Cher into The Rock and Roll Hall of Fame.

Cher World reports that Cher performed a private shew in Monaco. Some say this is proof she's starting back up to tour again. Here is some fan video to get you excited about this news.

In one odd story from Mediate, Mike Huckabee is shown dressed up like Cher to sing "I Got You Babe." I don't know what to say about this. I'm speechless.

Over my vacation, I was reading an email argument between some friends regarding the recent rape allegations against Runaway's producer Kim Fowley. One friend posted this NPR story about "the cruel truth about rock and roll" and how sexually predatory it is regarding young performers. It's truly sobering and something every fan of rock music should read. It makes you wonder what awful experiences Cher might have had as an almost-underage performer working in the 1960s. 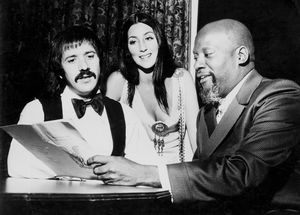