The Eye Has To Twitch 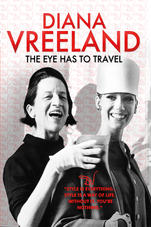 Cher Scholar Jimmy Dean notified me last week that the Diana Vreeland documentary The Eye Has to Travel is now on DVD. So I purchased it and watched it hoping (a) to for some Cherness (let’s be honest) and  (b) to learn something about something.

Disclosure: I recently watched the movie Monk with a Camera about Nicky Vreeland, Diana’s grandson, and loved it. And I’ve beginning to think these movies represent, for me, a dichotomy of meanings. I recommend watching them as a two-fer.

If you understand what I mean by that, you’ll probably agree that I’m not the target audience for this kind of thing. In fact, I have to admit I found Diana Vreeland pretty insufferable. It didn’t help that Mr. Cher Scholar was listening to the movie from the kitchen where he was making homemade dog food (long story) and making snide impersonations of her affectations. A bit distracting but could I have survived this movie without them? No I could not.

You might disagree with me completely. Especially if you love fashion. Here’s the thing. I actually love the Vogue spreads of 1970s. I agree they’re timeless and raise the level of fashion photographer to art. So I wanted this documentary to make an argument for the value of Diana Vreeland and her contributions. Not only did the movie fail to make a coherent, meaningful argument (I don’t even remember the title of the movie being explained), but I felt like one of Diana Vreeland’s sons: my lot in life is to make do with the measly morsels of substance Vreeland consents to provide.

I was put off by the whole thing. Vreelands “voiceovers,” (really interview footage with Paris Review editor George Plimpton), are a misleading attempt to give the documentary cohesion. Unfortunately she comes off as completely full of herself in the process. Sure, Cher could do the voice over on the story of her life. But wouldn’t it be better if someone else did it? You see what I mean? You can say you’re fabulous. But it’s really more effective if someone else says you’re fabulous.

A lot of the dialogue between Plimpton and Vreeland went as follows:

George: Were you still living in London then?

Diana: Nooooo!
(with a tone of “how can you even ask me that, you silly person!”)

And when I say affectations, one of hers was to talk like she was a character in a William Faulker novel or a Tennessee Williams play. Real people don’t talk that way. Oh, but Diana Vreeland wasn’t a real person. Ok, fashion-designer-person-who-must-talk-with-a-cigarette in your hand…"whatever."

Because the film is full of vapid statements from everyone, you start to notice the big black holes in the story. Like there’s no life here. It’s all work and no play. Plimpton makes a few attempts to draw Diana out about her mother and her children. Diana deflects all attempts to talk about her feelings and her family, with the exception of how she appreciated her handsome husband. Her own children interviewed mentioned how her disinterest in them hurt their feelings. Asked by Plimpton to tell a story about her kids, she instead told a fantastical story about Charles Lindberg. Ironically, her sons and grandsons all come across as infinitely more interesting than she does.

Maybe this is because, as one of the designers insisted, "Fashion is Boring." Is that even true? Fashion didn’t seem boring in the French movie about St. Laurent, Amour de Fou.

I think the wheel-spinning monologues from colleges, (the Anjelica Houston outtakes illustrate this well), reveal that it might have been a hard stretch for folks to talk about her. Every story is either too general or too specific. Granted, nobody in the fashion world ever really seems passionate about anything so it’s usually hard to tell if their lack of enthusiasm is just an affectation of the profession or they’re actually not that passionate about the Vreeland. They might be passionate about what she achieved or about her innovative ideas but very few of those ideas were actually described.

No cohesive life chronology evolves after an hour and a half and there are few lessons to be drawn from the “story” such as it was, although Diana would pause after anything she said as if she’d just dropped a profound turd on you.

Vreeland aggressively markets herself as style and artifice over content. I was never bowled over by this marketing strategy although people all the time accuse Cher of mastering it. And you can believe that if you don’t want to look very closely at Cher. Personally I couldn’t be a fan for 40 years if that was the case. I’d die of boredom, I would! Cher may not articulate a point of view about depth but she exists as a statement of some interesting complexity.

That all said there was one Vreeland idea I managed to untangle out of this mess of a movie, her appreciation of and focus on 'the flaw.' I agree with her on this. Your flaws make you lovable. Not your perfections. People go chasing perfections all the time (myself included) in a misguided attempt to gain  love (or attention). But even in Vreeland’s case, (a woman highly whose body is heavily flawed by high-fashion standards), the attraction to the flaw seems more about what this means about her. It’s as if she’s saying, “Flaws are good. Sure I happen to have them. Does that make be biased? Is that a coincidence? Maybe I’m not the ugly duckling my mother said I was. Now I boss pretty perfectly-faced, statuesque women around. Now I determine what’s beautiful and what’s not. In other words, my mother was wrong." That’s messed up!

But she did give us Cher in many pages of Vogue magazine. 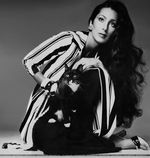 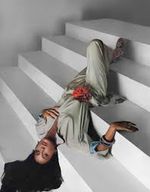 To add insult to my injuries of time lost watching this film, the Cher photos are in a paltry three scenes: a scarce few modeling shots, her famous appearance at the MET party in 1975 and one photo with Sonny as part of a scene suggesting Diana was hanging-out-buddies with many celebrities, including Jack Nicholson (who she had a crush on), Angelica Houston and Warren Beatty. Now that’s a dinner party.

The movie was self-important and boring. The translation fonts and descriptive text were affected and hard to read... and that pretty much describes the whole experience.

IT WAS A GREAT TIME CAPSULE OF VOGUE AND FASHION AND PAST MODELS AND
CELEBRITIES AND SOME OF THE EXPERIENCE OF WHAT WAS GOING ON IN THOSE
DECADES.

AS FOR DIANA, PERHAPS THERE
WASN'T ANYTHING MORE TO HER, EXCEPT, HER JOBS AT THE 2 MAGAZINES AND THE MET. I THINK THATS ALL SHE CARED ABOUT AND THATS ALL THERE WAS TO HER AS A PERSON. HER WORK AND WORKING. I THINK THE FASHION WORLD AND THE SHOWBIZ WORLD ARE PROBABLY FILLED WITH PEOPLE LIKE HER: NO REAL SUBSTANCE TO THEM PERSONALLY; JUST PROFESSIONALLY, THROUGH THEIR WORK.

jimmydean
ps... I said watch it on Netflix Documentaries. Not buy it. I am amazed at level of dislike you have for this woman.