New Century, New Cher Model
The Eye Has To Twitch 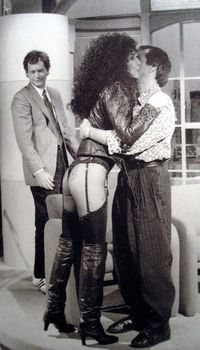 Recently I also made an effort to check out Cher’s Facebook page. Reportedly she’s been posting more there and happy to have more room to speak her mind. But she doesn't post there as often as she does on Twitter and her tweets continue to make news on an almost weekly basis:

Cher on Obama and the ISIS war: http://www.thedailybeast.com/articles/2015/05/27/cher-is-not-impressed-with-obama-s-isis-war.html

Cher being frustrated with the black hole that is Pinterest: http://www.elle.com/culture/celebrities/news/a28569/cher-pinterest-twitter/

Chaz Bono is still helping out on the West Hollywood election of Heidi: http://www.dailymail.co.uk/tvshowbiz/article-3096389/Chaz-Bono-campaigns-help-former-bandmate-try-win-local-council-election.html

David Letterman exists late night. This was cause for many trips down memory lane for the press, including many instances of Cher on the show.

The article describes the taking of the photograph above: http://www.nydailynews.com/entertainment/tv/photo-cher-peeping-dave-offered-laugh-article-1.2230110

Okay so I was not prepared for my melodramatic sobs during the final episode. For the past 20 years I’ve only watched the show if Cher was on it. I stopped watching back in the NBC days. But the exit of Letterman affected me very emotionally for many reasons, none of which have anything to do with Cher.

Which reminds us, Anne Meara passed away last week. My earliest memory of her is on this mysterious talk or award show she appeared on with Jerry Stiller Sonny & Cher as a they joked together as a mirrored foursome. I’ve never seen that clip since. Did I imagine it? Was that a dream? Sad to see her go.

Speaking of the Institute, one of my plans was to hang my Cher tapestries. Remember the Cher throw with the praying hands? The Believe-era shot from the Farewell Tour. I know I had one of these because it seriously creeped me out unfolding it, especially the back side. Over the last 10 years of moving I’ve lost it. Mr. Cher Scholar just purchased another one for me for my birthday. He said having worked at the Georgia O'Keeffe museum

, he understood a "major acquisition" when he saw one. We re-opened it yesterday and I was freaked out again! That's one scary rug! Mr. Cher Scholar agreed and said it reminded him of the Shroud of Turin.

I feel the same way you do about david letterman and the passing of what was to what will be.

More and More I see MY GENERATION'S Celebs and Stars and News Anchors
and Weather"men" and Favorite Tv Shows and Movies and Books and Places
and People and Friends and Co-Workers and Family Members and my DEAR MOTHER as SUDDENLY OLD, REPLACED, OR GONE FOREVER.

In my copy of "your true home" by thich nhat hanh.
There is a passage called:
Tasting True Liberation.

The first 3 sentences say:
"Everyone we cherish will,someday,get sick and die. If we do not practice the meditation on emptiness,when those things happen, we will be overwhelmed. Concentration on emptiness is a way of staying in touch with life as it is,but it has to be practiced and not just talked about."

jimmydean
ps... just stay the hell away from Diana Vreeland and I think you will be OK.