They met other times, however. Dylan was on David Geffen’s record label while Cher dated Geffen. She also ran into him while with Gregg Allman. See the photos below.

Bob Dylan always seems happy to see her and yet equally happy to dis her in regards to her version of “All I Really Want to Do” and his comment about calling “Dark Lady” trash when she played it for him and Geffen back in 1974.

To paraphrase what Rosie O’Donnell once said about Sonny, “Sit and spin, Bob Dylan!”

Out-take of the above meeting: 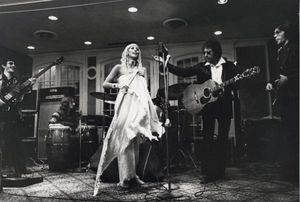 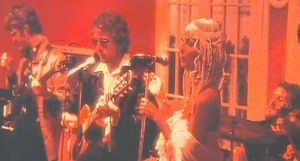 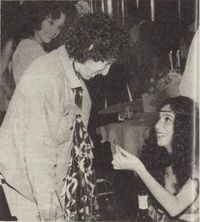 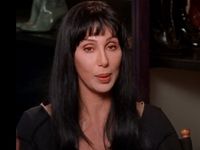 I went to see The Wrecking Crew movie again at my local art theater in Albuquerque. It was a big hubbub there on Saturday night with oldies fans and press coverage. I sat next to a grizzled old DJ who lamented that Frankie Avalon, Bobby Rydell and Chubby Checker were not yet in Cleveland’s Rock and Roll Hall of Fame. He admitted it was very political.

Before the movie ran, pics of the wrecking crew artists flashed on the screen. One was Cher at the Hollywood Bowl. I wasn’t able to find it online but the man in the row behind me said, “so beautiful!” 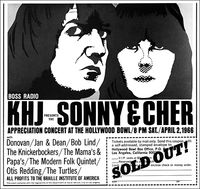 Denny Todesco, the director, called all the movie's hardcore fans "wreckies." He said he started working on the movie in 1996 when his Dad Tommy Todesco was diagnosed with cancer. Nineteen years later, the movie is getting theatrical release. Todesco used Kickstarter and donations to pay off the crazy $500,000 in licensing fees for all the music in the film.

Afterwards, we had a Q and A with Denny and Marty Cooper. They talked about the Jack Nitzsche song "Lonely Surfer."

Denny Todoesco said the only criticism anyone had about “Snuffy Garrett” was that he wouldn’t let the musicians fix mistakes or do it better once Garrett felt he had a take he felt was sell-able.

When I saw the movie at the Arclight in LA many years ago, Todesco said he couldn’t get Leon Russell for an interview. Someone in the audience said, “I can get you to him.” Leon is in the new cut wearing a pinstripe suit and twirling a cane around like the New Orleans mafia. Todesco said he never could get Tom Petty, Max Weinberg or Bonnie Raitt and said he didn’t know if this was them or “their people” who were impenetrable. But he got Cher early on it sounds like! I was worried new Leon Russell footage would deplete the Cher footage in the movie but she’s still prominently in there.

Todesco mentioned an interview he had done for the Mark Maron podcast. If you're interested in more about The Wrecking Crew, it's really good.

In the podcast, they also discuss the Muscle Shoals movie. From this trailer, it doesn't look like Cher is in this one although Gregg Allman is. For a nano-second at the end of the trailer you can see a flash of Cher's album go by. I was wondering if they were going to cop to it.

The Wrecking Crew website store is full of great stuff now: http://store.wreckingcrewfilm.com/. You can get a coffee table book, a DVD or Blueray of the movie with six hours of footage! There's also a cool Goldstar jacket available. I was inspired to get Tommy Todesco and Hal Blaine’s books after seeing the movie again. They both have sucky reviews on Amazon and Todesco’s book lists only one paperback copy the seller wants $999 for. What the hell? You can get an eBook copy for $25 (actually an outrageous price for an eBook, too).

But that Hal Blaine! What a cutie he was. 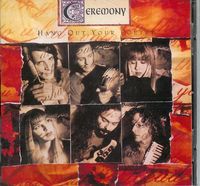 So Heidi Shink, Chaz Bono’s former girlfriend, is running for city council in West Hollywood. This is her page: http://www.heidishink.com/.

For the record, I kind of like Heidi Shink. She seems to have spunk. And like Lou Grant, I like spunk. She also came across well in the book Becoming Chaz when Chaz describes the hullabaloo their band endured at the hands of their producer Mark Hudson. (Remember Husdson was Cher’s friend going back to the late 1970s, appearing with her and the Hudson brothers on Merv Griffin’s daytime show and co-writing her tribute to her failed relationship to Gregg Allman, "My Song." 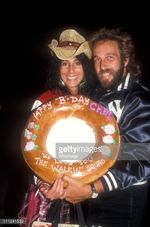 Forget about harassment, team Shink had me when Mark Hudson started painting his beard.

But wasn’t Cher’s song “Disaster Cake” about Heidi Shink? Am I mixing Chaz girlfriends here? Do I have my lazy scholarship down right?

"Disaster Cake" doesn’t sound too much like an endorsement. It's true, maybe Heidi was young and silly then. Maybe she’s more endorse-able now. In any case, I think we need a new song. I propose “Best-for-West-Hollywood Cake.”

Stories about the endorsement:

Story about the hysteria caused by the endorsement:

A recent US Magazine has the Kardashian clan exploring their roots with a visit to Armenia on the 100th anniversary of Armenian genocide. Cher went to Armenia back in the 1990s with Robert Camiletti.

Recently, Cher called on Turkey to admit the genocide: http://armenpress.am/eng/news/801610/cher-urges-turkey-to-acknowledge-genocide.html

The press will stay on the story: http://www.chicagotribune.com/news/sns-wp-blm-news-bc-turkey23-20150423-story.html

Cher admits she didn’t have as much contact with her Armenian relatives but that doesn’t  mean her Armenian side is less important than her other heritage. Sometimes absence matters as much as does  presence.

You can explore the reasons why a certain side of the family is missing. For instance, why didn’t Cher see her Dad enough? He was allegedly a mess. Why would he have been a mess? Maybe his parents coddled him too much (just a hypothetical—I don’t know these people!). Why might he have been coddled? Because his parents were genocide survivors and they were just happy to have a family alive and breathing. Why was there a genocide in Armenia? Well, for that we turn back to the Turks.

Whatever the story, every decisions her relatives once made has impacted her life in some way.

Other Armenians of note: http://www.armradio.am/en/2015/04/22/cher-kim-kardashian-and-andre-agassi-armenias-a-list-diaspora/ 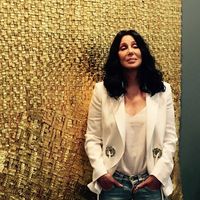 Been tied up doing the National Poetry Writing Month challenge this month (I have to write a poem a day) and obsessively watching episodes of Schitt's Creek, the new Canadian sitcom on Pop TV staring SCTV's Catharine O'Hara and Eugene Levy. Thankfully it's Canadian and may not get cancelled just because it's on Pop TV and no one knows where that is. It's very funny.

A few weeks ago I received a few missives from the Cher store that items were 50% off if you spent over $30. As it turned out only three items were 50% (of which I only wanted one) and to get over the $30 hurdle without buying a $75 sweatshirt you didn't want, you had to buy one of the other sucky three items. So I went over to ebay and bought a Mark Twain magazine to abate my shopping frustration.

I love it when poetry and Cher collide. This month is full of that sort of thing. Remember David Essex on Cher's solo show? He now has a book of poems!

Take a look at him now and then watch him with Cher singing "The Long and Winding Road."

Cher was recently honored at the ‘Inspiration Gala’ in Brazil.

Articles about Cher's visit to an art gallery before the ceremony:

Coverage of the event:

amfAR CEO Kevin Frost spoke passionately about amfAR’s Countdown to a Cure for AIDS initiative, with the goal of developing the scientific basis of a cure by 2020. Announcing a $100 million cure research investment strategy, Frost stressed that “amfAR has the will, the commitment, and the know-how to get this done, and to truly make AIDS history.” Frost then presented the amfAR Award of Inspiration to Cher. Speaking of her willingness and ability to use her fame for the greater good, Frost described her as one of the great champions in the fight against AIDS. Cher received a standing ovation and encouraged the audience to “help bring an end to this terrible disease” before bringing fellow honoree Jean Paul Gaultier on stage for a kiss. 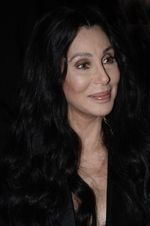 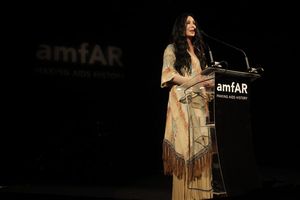 The Perils of Fame

The National Enquirer on stands now claims that Cher is dying. Cher refutes this.

My co-worker sent me this amazing story about a guy whose iPhone was stolen and he became suddenly famous in China. Lots of good commentary on the perils of fame and why the famous need "teams."

A follow up on the Edith Hill and Eddie Harrison story:
http://entertainment.inquirer.net/167192/cher-paves-way-for-elderly-womans-homecoming-after-a-court-dispute

Review of the Scottish S&C Musical (The Guardian)

The April month of Poetry was dedicated to hip hop poetry and it was interesting to see so many kudos thrown to The Wu-Tang Clan. Kenneth Goldsmith is a conceptual poet who's conceptual manifesto is published in the same issue. Since Cher is often accused of being artificial (by rock and roll standards), I have long been collecting commentary about artifice in art. Goldsmith had three things to say about this:

"Authenticity is another form of artifice."

"At this point in time, it's hard to verify authenticity, singularity, or proper sources for anything. Instead, in our digital world all forms of culture have assumed the characteristics of dance music and versioning, where so many hands have touched and refined these products that we no longer know, nor care, who the author is -- or was."

"Auto-tune your next book of poems."