Another Toto member and Porcaro brother has died. Toto's bassist, Mike Porcaro, died last week at age 59. David Hungate was their original bassist. Mike's brother, drummer Jeff Porcaro, died in 1992 at the age 39. David and Jeff were members of Sonny & Cher's band during the early 1970s, later becoming founding members of Toto with David Paich (also of Sonny & Cher's band and of "David's Song") and Steve Lukather. Many Toto members have worked with Cher over the years as studio musicians and as inspiration. Read Mike's New York Times obit or more about the history of Toto. 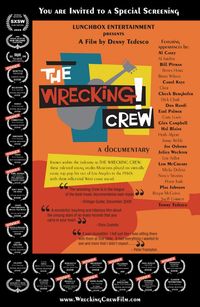 Great news! The Wrecking Crew documentary is coming to an art house near you! I saw an LA screening of this movie back in 2008 and did an expensive blog post about it. Cher in not only interviewed but you learn a lot more about the musicians Sonny & Cher were working with in the 1960s. There is some good old S&C footage here and as the press for the movie states, these musicians were “the unsung heroes of the West Coast Sound."

Cher offered to help pay for needed upgrades to Hill's family home in Alexandria and some medical expensive because Cher was inspired by the love story between Edith and her husband Eddie Harrison who died after they were forcibly separated in December. The story was picked up in at least 145 outlets as of last week.

Stef and Johnny, Peter and Lily, and Sonny and Cher

It's rare to find some Sonny & Cher impersonators (even harder to pull off), but there's a new Scottish pair doing a tribute play called "And the Beat Goes On." The Sonny might just be on to something with his stern Sonny stare. But the clothes need a little workup and what's with the teddy bear?

Kathy Griffin Opens Up About Her 'Fashion Police' Exit

Griffin does a very funny Cher impersonation in her act and her friend Cher expressed support last week when Griffin quit Fashion Police...and I do, too. I love how Griffin and Kelly Osbourne have stood up to bullying, especially calling it out among the LA fashionauts.