Cher Teases with Tweets: A New Perfume in 2015? 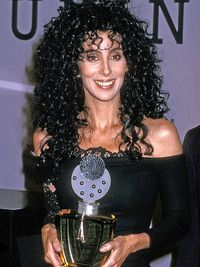 I've been felled for two weeks by a cold virus! I literally came home every day from work and downed night-time cold juice and then slept for ten hours until I had to do it all over again the next day. I'm barely over it but we have some Cher news to cover.

My friends have been in a donnybrook over Morrissey's continued disses of Madonna, including of her then-upcoming performance on the Brit Awards. Although Morrissey does have a point to make about award shows being more about promotion flim-flam than about talent awarding, he complicates his argument by continually being a bitter butter ball.

In any case, Morrissey was probably gleeful to see Madonna take a nasty fall during her Brit Awards performance last week. Listening to The Stephanie Miller Show, I found out that Cher and Liza Minnelli had given public support to Madonna after her fall. Someone on the show joked that falling on stage was like a Tuesday for Liza. Funny. But Cher's tweet reminds us how stressful dance performances can be, especially considering Madonna's wardrobe malfunction.

"Heard Madonna Fell On Stage This is Something WE ALL DREAD...MADGE, I GIVE U PROPS, U R a CHAMP 4 FINISHING YOUR SONG...I HOPE U R UNHURT"

Cher World is reporting on some other Cher tweets involving 2015 projects. She's planning to launch a new perfume. More Cher crap to buy! Awesome! I truly hope she poses with another giant jug of the new stuff (see pic above). Cher World also posts some of her latest pics and says that she's still working to restart her tour.

I saw the laconic Don Williams perform last night at our "big" showroom at the Isleta Indian casino. He was awesome although much older than I expected. They had to prop him up on a bar stool to play for an hour and 10 minutes. He barely moved but then he barely moved back in the 1970s. But with that voice, who needs dancers and wardrobe malfunctions? I've been watching old country acts on Pop Goes the Country and itching to see some of them. Unfortunately, most of them have died or retired.

I still keep hoping Cher will come near Albuquerque but looking up our biggest venue, the sadly small Tingley Coliseum at 11,571 seats. Which I guess is why all the somewhat decent acts prefer the Indian casinos. 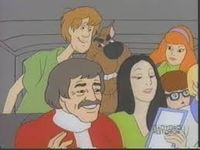 The Music Times has done a review of Cher's non-variety-show TV work, including her appearance on Scooby Doo. This reminds me, I met a huge Scooby Doo fan at work a few weeks ago. We deconstructed the shows together. I lamented not being able to find Scooby Doo bandaids and she told me when to expect their return to the market. I asked her about her feelings on Scooby Dum and Scrappy Doo (not favorable as expected) and I said I was a purest for the original creepy series. I especially didn't like the celebrity series because it was too light (visually), to silly and not scary enough. She agreed, she said, with the exception of the Sonny & Cher episode!

Christina Aguilera does a Cher impersonation on The Tonight Show. This remind me, do you notice how many times Bravo plays B?. How far Bravo has fallen. I'm taking to making a list of everything that annoys me about that movie. It feels like a scholarly project. Mr. Cher Scholar is helping. I keep suggesting we watch Silkwood as an antidote.

Cher criticizes the Arkansas governor over not vetoing his state's anti-LGBT bill.

One of my friends has sent me subscriptions to three celeb rags: Us Weekly, Entertainment Weekly, and the Star. Having the Star (or any tabloid) home delivered feels surreal. The February 16 issue has Val Kilmer dying for his religion, which apparently is Christian Science. Another piece praises Chaz for getting buff, losing 65 pounds down from his high of 250 pounds. They claim he wants to try out for Mr. Universe and is on a low carb, no sugar, no dairy diet. Fellow tabloids TMZ and The Daily Mail also reported the story. In any case, Chaz is now celebrity fit.