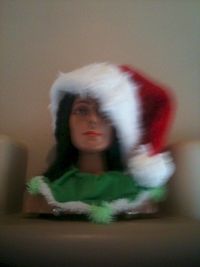 A lot of things conspired at the end of the year to make this so:

- I didn't add a new outfit for the tree this year. That usually inspires me to put up the tree.

- I was bummed out about what a sucky year 2014 was, health wise for everybody.

-  ICANN laid me off right before Christmas and hired people in India to do our jobs. In the turmoil of cleaning up ICANN tasks and preparing to start my new job at Central New Mexico College, I was swamped and pooped.

- Mailing Xmas gifts took all my energy this year so there was little left for holiday cheer. Our house was depressingly dark this year compared to our neighbors but I didn’t have the energy to do anything about it and Mr. Cher Scholar is not the festive type. Although he did try to get me interested in Christmas with his sudden, new-found interest in Christmas yard inflatables. Now if there was a Cher Christmas inflatable...

- I’m in the thick of three new writing projects: my New Mexico novel (post scene-layout, starting the first draft), my Buddhist-cowboy poems (finished the final draft, preparing to submit), and a new eBook (finished final draft; getting ready to publish in early 2015), and a long list of end of the year to-dos regarding my writing and websites. I also reformatted my first poetry book (get it on Amazon or Smashwords at a new price of $2.99). 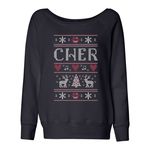 Luckily Cher was more festive than me and launched a whole line of Christmas products. I bought the ugly-sweater sweatshirt (and wore it on Christmas to visit my three Aunts) and the White Hat Girls Tee. My friend Julie wrote to tell me Cher was on the cover of a new magazine called Closer and she saw it at Target. I was a day late and missed it. Here's the article about Cher's cancelled tour.

Posted at 04:53 PM in Cher Product, Concerts, What This Really Says About Me | Permalink | Comments (6)

I was going to email you too...

but, after taking my mother to her house the week before xmas and decorating her entire house for the holidays........ I ended up REALLY ANGRY WITH MY SIBLINGS AND... DID NOT TAKE HER BACK TO HER HOUSE FOR XMAS...( she went to my sisters on xmas day and I spent xmas eve with her at her retirement apartment.)

Mary MARY, you need to let got of this depression over health matters... it is a fact of life and happens...)I must say I WAS really depressed over my siblings for the last week, to the point, I just did not leave my apt.

it has passed, because, I finally let it go and realized ONCE again, I can't fix them and their relationship with my mother and each other.

MARY,
get up, dust yourself off
AND PUT ON cher'S DARK LADY ALBUM( THAT WAS ONE OF MY LAST SANTA cLAUS PRESENTS, BEFORE, I BECAME A "GROWN-UP" AND START
aLL OVer again....

JDP, you cheer me up! You said everything right there but "snap out of it!"

I bought a cher present for me toooo.
from ebay.

3 things:
the original poster of her from 1979, posing in that Leopard Top, the 8x10 b/w glossy of her with the new hair, white shirt off the shoulder and the "purple cher show button"...

I want to buy the new dvd of JIMMY DEAN and the new
(FINALLY, AFTER ALL THESE YEARS)release of:

THE LEGEND of LIZZIE BORDEN
mini-series with Elizabeth Montgomery....

I have been reading a bio on her....had to stop for school texts...

SAMATHA was my first love!!!
until, cher came along...

YOU must understand, I HATE it when old tv shows and movies I loved and grew up with are REMADE....

I watched a few and I refuse to watch anymore...
they are an insult to the originals...

BUT,
I was very happy with this
movie... IT was not a remake...
it paid respect and homage to a genius tv show and it's stars....

it was not about RE-DOING
it.

Hey Mare,
My Christmas was similar for different reasons although I decorated because it was the first Christmas I spent at home by myself. But I will say I plan to make 2015 better (SOMEHOW). I have the Closer magazine and would be more than happy to send it to you. email me your address. Merry Christmas.

Do you have an extra copy? If so I'll connect with you via Facebook.