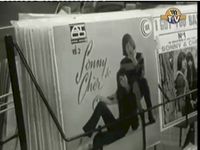 Cher scholar Tyler sent me this clip, the Hell & Keller Pride remix of "The Beat Goes On." Thank God somebody out there is remixing something besides "Believe." I liked the video editing job, too.

I also found the original promo video sampled in the above remix, Sonny & Cher at a record store performing "The Beat Goes On." The clip opens on the record bin at left.

What record is this? Something about "Vol. 2." Is this a compilation album I've never seen before? Does anyone out there have this record?

This is now a good time to say I've always hated that boring ATCO logo.

In Entertainment Weekly for October 31 there's an article called "Retired? Not So Fast" Listed are people who made big claims about retirement but came back. The list includes Garth Brooks, Ozzy Osbourne, Jay-Z and Barbara Streisand.

In the same issue, Nancy Sinatra’s version of "Bang Bang" is also listed as part of a killer playlist for Halloween.

Costumes Through the Years

As I lamented earlier, I missed the People Magazine detailing all of Cher's concert outfits. I broke down and found a copy from eBay. What's ironic about the article is Bob Mackie does brief commentary on the evolution of some of his common designs. Problem is, he didn't design the new outfits in review. The D2K Egyptian opening-fit is compared to the one Mackie designed in Cher and Other Fantasies (1979). The full-fringe disco outfit from the Farewell show (red version) and the Cher at Caesars Believe-fit are compared. This comparison is very odd. First of all, this outfit and song are not even in D2K (yet) and they could have used either the Cher at Caesars fringe-fit (blue) or the older, original version back from the Take Me Home tour in 1979 (silver). 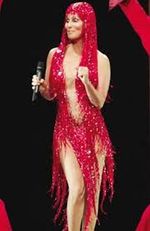 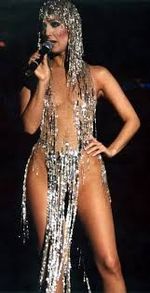 The current gypsy outfit is compared to the Farewell Indian sari instead of maybe to the original one from The Sonny & Cher Comedy Hour. The newer hole-fit (Mackie calls it "The Swiss Cheese") could also have been compared to her 1979 Take Me Home concert tour version instead of her 1980s video version. The Half Breed photo uses the version Sonny & Cher toured with instead of the iconic TV show version from 1973. Kind of wonky choices here.

Obsessing about these things…it’s what Cher scholars do.

Cher News linked to a new radio interview for Cher. In the interview Cher says she loves the movie The Incredible Mr. Limpet. I would love this movie, too, because I love Don Knotts except for the fact that I have a very bad association with it due to Mr. Cher Scholar and a disastrous birthday night with him that included this movie back in 2006.

Anyway, Cher laughs a lot in the interview and talks about the Broadway play based on her life. 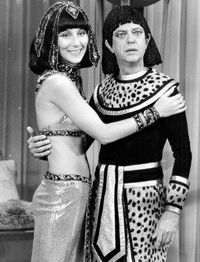 I also don't think that I've ever seen that "Vol 2" album before... I wonder if it's a compilation, or maybe it's their second album with a new title/cover?