Don’t Cry For Me Cherilina 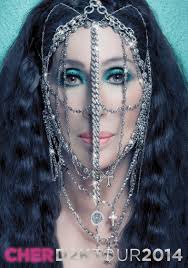 An ironic image for Cher's D2K tour: trapped by a virus.

Last week was a very sad week for me. Indulge me, but I’m thinking to make a list will be a cathartic process.

1. As of Sunday when I stopped in Albertson's to sit at one of those blood pressure machines, I've had to accept that this, my 45th year, I’ve developed high blood pressure. Three out of 5 recent tests over the last 6 months have been too high. Heart issues have felled everyone on my father's side of the family. So this is not happy news.

2. The Bill Cosby story is wearing me down. Not only have 16 women accused him of various sexual crimes, but he’s latest TV appearances (The Colbert Report appearance before the story even broke) and interviews have been eerily self-important and left an unsatisfactory taste in my mouth. It reminds me of the Woody Allen incest saga. I grew up on their work and my esteem has been felled by their tabloid scandals which are both hard to prove or disprove (at this point). But that really doesn’t matter because no outcome escapes a tragedy. In Woody Allen’s case, either he did commit incest with his daughter or Mia Farrow is crazy and has contaminated her daughter’s life. Both scenarios are awful. Likewise, Bill Cosby is a rapist or 16 women are conspiring to ruin his career. Problem is, they have little to gain after the statute of limitations. And if you think it’s impossible to keep such crimes a secret for 40 years within an entertainment organization, let me remind you of Penn State and Jerry Sandusky. There’s no pretty truth here. Just yuckiness. And it reminds me that as a society we place a heartbreaking amount of misspent worship on celebrities (no offence to Cher). From what I've seen, baring a few exceptions, Hollywood does not attract balanced, heroical personalities and heroes don't grow from the seeds of maladaptive narcissists. In any case, as Mr. Cher Scholar says, this story pretty much bankrupts Fat Albert, The Cosby Show, the jello commercials, I Spy, all the standup routines....

3. I found out Thursday my friend has brain cancer. She's been having seizures.This is the fifth calamity to befall her in so many years.

4. That same night the Chiefs lost to the Raiders. This was more depressing to Mr. Cher Scholar than it was to me but it did rub off.

5. Hours later I was online via email helping to talk down another friend from an emotional life-crisis.

6. I started the next day looking at my emails and was assaulted by a Facebook status message made by one of my poetry colleagues. The post, not directed at me, was a rotten spew of hatred regarding last week's political events. It was dumbfoundingly angry, hardly reality-based, and left me disturbed for the rest of the day.

7. The Ferguson story has also depressed me. The grand jury just came out tonight: no indictment on the police officer who fatally shot a black teenager. I grew up in St. Louis where Ferguson is a suburb. I can say many positive things about growing up in St. Louis. I can also say that I know first hand St. Louis has more than its share of racists. I know because many of them used to confide in me their racists thoughts. They did so from high school through my many post-college jobs. I do have friends in St. Louis who are not racists, God bless 'em. But let’s just say I knew more racists there than honest, God-loving people.  Stories appeared last week about guns selling out, the governor declaring a state of emergency and bringing in the National Gard. The KKK is asserting itself with great irony and evil. Interestingly, my St. Louis friends used to chide me about living in Los Angeles, with all its gun violence and rioting. There were zero riots or highway shootings the 8 years I lived in Los Angeles. And as it turns out you don’t have to leave St. Louis for those things. I’m so disappointed that city hasn’t evolved in the last 20 years since I left.

8. My depression and anger over these political events led my cousin, who is a psychologist, to diagnose me Friday night as having "Work from Home Syndrome" - a condition that allows you to stew in your own anger until you become irritable all the time. He suggested I stop listening to the news for a while until my brain resets.

9. Cher has cancelled the remaining dates of her tour. And although she says she hopes she can “finish what she started” and resume the tour next year, this does prove the tour has been sadly ill-fated. It’s also a somewhat drastic and alarming gesture that makes you worry about Cher's health. Upsetting for Cher, her fans, and even Pat Benetar fans. It also means we are coming to the close of an era: invincible Cher.

I was working on a new Cher Scholar site page when I found out, an addendum concert page that lists all her concert dates and available online reviews of each show as I find them. It’s a work in progress but if you want to read old reviews, here they are.

Posted at 07:07 PM in Cher News, Concerts, That's The Obsession Talking, What This Really Says About Me | Permalink | Comments (1)

I call this THE CHERTASTROPHE.....there were early signs this would not work out well. First the Gaga duet is pulled, then the truly terrible album cover .... 2 blonde Cher's in a row, tsk tsk. THEN she procrastinates too long so Bob Mackie does not have time to do proper costumes .... so she is having last minute fitting for some rather iffy costumes in a warehouse in California ..... the first BELIEVE outfit was frightening and you could tell that overall they didn't fit like the usually do. It's a credit to Cher that she has such command on stage that you truly oversee those things ..... WB did not promote the album. WW was a bad choice for the first single - and where were the follow up videos? In this day and age you HAVE TO HAVE A VIDEO to promote a song. Considering Billboard counts YouTube views, it's more important than ever. Why wans't P!NK's contribution to the record emphasized with a great single release and video of I WALK ALONE? Oh the list goes on and on as does the beat...... one must wonder - will we EVER see another Cher album?