Some Cher sites, like Cher World and cher.yuku are saying that Cher will be on Jimmy Kimmel Live this Thursday night (October 30). They're also saying that she'll close down Hollywood Boulevard for a special outdoor concert.

This is the day before the big Halloween closures on October 31 around Santa Monica Boulevard in West Hollywood. And the thing is, she's not appearing on Jimmy Kimmels guest list for this week. We’ll set the DVR and see what happens.

It's amusing that I still say "VCR alert" even though VCRs are so ancient that young kids don’t even know what the term means. I have heard myself saying such idiotic things as "It's like a cassette player for TV."

Back when I was a teen and MTV was in full-power mode, my VCR was God. I used to turn on the MTV channel every morning while I was curling my hair, putting on makeup and assembling my Molly Ringwald/Stevie Nicks-inspired outfits.

The first VCR I had, (and I only ever had two), was billed as being so modern, it didn’t have a cord attaching its remote control to its main machine. It was cordless, people! That was innovation when I was a teen.

But I didn’t trust my cordless remote. It sometimes misfired. The batteries died.

Whenever a John Waite or, later, Cher video came on (John Waite’s rare videos like "Tears" always came on in the morning), I would literally listen for the first few chords of a song and then literally dive across the room for the record button on the VCR, which would make this long, painful tinny inhale sound, as if a little tiny crane were moving the record heads from a whole other part of the machine to the tape. I’d always miss a few seconds of each video before the thing actually started recording. I cursed this technological limitation to my fan indulgences. The fact that most videos are now on youtube, all those early missing seconds especially, kinds of kills me a little inside. It’s what represents my own particular tragedy of misspent youth. On many levels.

That Cher would one day make an appearance on MTV (and not be relegated to VH1 like my man Barry Manilow) was not something I ever thought conceivable. As much as I don’t enjoy the Geffen era as much as the previous and following eras, Cher on MTV was a real turning point in Cher fan existence. You could go out into the teen world with a bit more cultural power. Cher was rockin it...on M…T…V. Everyone could suck it.

And while I was waiting for all versions of John Waite’s "Change" video to come on in the mornings  (1, 2), I was now also getting alternate versions of "We All Sleep Alone" (1, 2). I couldn’t wait to get back home and play them over and over and analyze the differences.

Setting a VCR ahead of time took skill and thought. Say if you had a social life and felt risky enough to record an appearance while you were out with your friends. I missed a whole Barry Manilow special this way once. I also missed Cher on Phil Donahue and wasn't able to see if for over a decade. You could screw up while setting the time. The tape could get chewed up. Life was so precarious then. Sure, satellites fail now. But the show will turn up someday, somewhere online or on a bootleg.

It’s not quite living on the edge anymore. In other news, USA Today marks Cher's show one of the five live shows to see this year, a list that includes Stevie Wonder and Bob Dylan. Not too shabby.

Not Busier Than Cher, But… 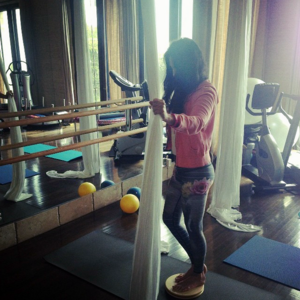 out of my mind busy. I had to put that comma in my blog title because without it, the title read like Cher's ass was busier than me. Probably true but still a distracting message.

Over the last few weeks, my brother and sister-in-law came to town and we tried to show them the great state of New Mexico in a week. I've got another guest coming next weekend. And if you know me, you know I only clean the house when people are coming over. So this summer, I've been cleaning a lot! Yesterday, I spent the day covering the front of our house with Halloween decorations. I've also been trying to keep up with the latest in haunted houses in my city. I've been very distracted from the Cher Universe working on my projects, including final drafts of my Goodnight-Loving Trail poems, and notes for a new novel. I've also been preparing an essay to make into an eBook. It's called "Writing in the Age of Narcissism." On top of that, I've recently been drafted by my Dad's side of the family, the Burquenos (which is local for "people from Albuquerque"), to help organize a family reunion next year to celebrate my Aunts 90th birthday. In all this, blogging gets short shrift.

Oh, and we've been busy watching Quick Draw Season 2 which had a lot more stunts, was a lot funnier and had some surprise guests. But the most recent surprise has been the great fan art people have been sending in to the facebook fan page of John Lehr, including this hilarious send up of western statue-art collecting commercial sent in by a fan. The piece is called Vernon Shank Statue Commercial. It's very funny even if you haven't been watching the show.

The strong women characters on the show have been awesome this year, including the hilarious, lusty, toothless Wanda pictured above.

But there's LOTS  of Cher stuff to get to: First, I came accross this image right in the October 10th issue of Entertainment Weekly depicting an Edith Head outfit for Ginger Rogers. You can clearly see a direct line from Edith Head to Ray Aghayan to Bob Mackie and Cher.

Secondly, breaking news!! Cher gets some respect in Entertainment Weekly. More than seeing Cher's new Bob Mackie costumes in the second leg of her current tour, THIS is what required that I get some oxygen stat! My October 24th copy came Friday night and I'm perusing through the issue (which you can do in like 15 minutes), and I see a short news item on the nominees for this year's Rock and Roll Hall of Fame inductees. No, Cher didn't make it. Not expecting that.

The first section describes this year's biggest surprises. I scanned that part and thought, "wouldn't it be an alternate universe if this article called the HOFers out for snubbing Cher?"

AND THEY DO!!! I couldn't believe it. Entertainment Weekly has not been 100% Cher-loving over many years of record reviews. But, clear as day, the middle section is called "BIGGEST SNUBS" and Cher's hole-fit picture is representin' with this paragraph underneath:

"For the second year of eligibility in a row, De La Soul's game-change style was over-looked. The Hall also missed an opportunity to acknowledge Cher--whose impact and longevity far exceed those of many of the men enshrined in Cleveland [my flabbergasted italics]--on the 50th anniversary of her first album. And if Joan Jett, nominated again this year, doesn't make the final cut this time, voters have black hearts indeed."

I ran into the living room and gave a lecture on Cher Snubs throughout the history of time to Poor Beleaguered Mr. Cher Scholar. I want to rip that page out and send it to my brother in Cleveland and ask that he and his wife organize a protest in front of the museum pronto, something he would never in a zillion years do.

Speaking of zillion, Cher is pissed at Zillow. See stories on GeekWire; Twitchy tracking Cher's tweet discussions; and an article on Bloomberg about Chinese buyers getting access to Zillow's U.S. properties.

This is the satellite picture of the Owlwood house on Zillow.

Here are the stories I missed in October:

According to Cher News a new version of the Norman Seeff photograph was for sale for a while (but it's sold-out now): http://cher.shop.bravadousa.com/page/SignedLithograph. What's interesting is how the store calls the photo "THE iconic 70s image of Cher."

So Cher's been sick lately as we all know. I hope it wasn't the ice bucket challenge that gave Cher the ice bucket illness. And although one of the U.S. tabloid rags had a picture of Cher on the cover last week insisting she was, in fact, dying (not the first or last time we'll see that melodramatic headline while waiting to purchase our Scooby Snacks), Cher says herself that she's on mend. Cher News tracks her tweets: she was actually in the hospital for a week; doctors say she's built to last; she's been to the gym recently; and she was humbled by the whole experience. I just hope she got some good classic movie watching in while being laid up.

http://chernews.blogspot.com/2014/10/photos-recovering-fitness-icon-cher-at.html
(Pics of Cher at the gym taken by Paulette, see top photo)

Cher News reported that Cher's concert-fits were profiled in the Fall 2014 issue of People Magazine. Is People Magazine now a quarterly? Bummed I missed that. 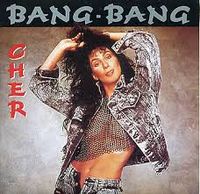 I finally listened to the Lady Gaga version of "Bang Bang" and I do like that it's not simply a re-working of the Nancy Sinatra version, which all the latest re-makings have been. Granted, the Sinatra version is pretty great and I never do get tired of hearing more incarnations of it, I also appreciate something different now and then. Gaga's version seemed more sincere and less ironic. Which is refreshing. I still don't like that red jumpsuit or the somewhat unnatural demeanor of her performance but what can you do?

By the way, this is one of my least favorite Cher single covers. Yes, chainmail tops were cool, but the acid-washed jean-jacket and jeans, the teenybopper hair flip and the wide-eyed expression all smell too much like 80s-teen-spirit, and worse--popular-girl 80s-teen-spirit. And what's with the unbuttoned button-fly jeans? Did Cher eat too many doughnuts before the shoot? Or is the boob-view, jeans-undone look a come-hither call to Anthony Michael Hall?

Posted at 11:53 AM in Cher Outfit Watch, Concerts, History, Music, Peripherals, What This Really Says About Me | Permalink | Comments (0)