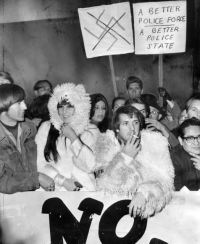 A picture that shows how little has changed 50 years later. We're still concerned with police brutality in 2014.

I was thinking recently when listening to Billy Bragg's great anthem, "Waiting for the Great Leap Forward" how Green Day revitalized their career a few years ago with a ppolitically-themed album. Cher’s tweets are unflinchingly political but why should her activism be trapped in Twitter? Would it ever be possible to hear a Cher album of political covers?

Think of all the great, old union songs, Bob Dylan songs, Phil Ochs songs. If Dolly Parton can get away with covering hard-rock songs revamped as bluegrass tunes, why can’t Cher do something interesting with political songs? Her voice is well suited to anthems and she would probably enjoy singing them. She could mine Billy Bragg's catalog alone. "Great Leap" proves you don’t have to go back to a folk sound to present a meaningful modern message. On Pandora I recently heard a very cool version of Creedence Clearwater Revival's "Fortunate Son" covered by Cat Power.

I found a few awesome lists of the best political protest songs. Interestingly, "Fortunate Son" was the only song on every one of these lists: