Cher News has been tracking the release of Come Back to the Five and Dime, Jimmy Dean, Jimmy Dean. Good news: the Blue-ray is available for pre-order.

The second leg of Cher shows were to start on September, 11 but Cher has had to push back 10 dates pushing this legs shows into December.

Slash reported to The Huffington Post about attending a Cher concert and needing to go outside to smoke eventually gave him pneumonia. So he quit smoking.

Cher is also being sued by her former choreographer Kevin Wilson. Read stories on:

The last link is the testimony of Jamal Story, one of Cher's dancers. He was the dancer featured in last week's story in Fortune Magazine: "How to Survive on the Road with Cher. He makes great reference to the chaos in the Ferguson suburb of St. Louis (my hometown).He says:

I am disheartened to know that racism is part of the charge leveled in a lawsuit at my boss...But even if there is some shred of merit here, the lack of consideration for the three brown band members (of which there are only seven) still in Cher's camp befuddles me.

In fact, one of the most interesting experiences I’ve had dealing with the color quota represented on stage happened on Cher’s stage in Vegas years ago. A brunette out for her wedding was replaced by the cousin of another black dancer on the gig. Adding two of the plaintiffs (who were also there) brought the count of bona fide chocolate up to four, and then there were the two of us too light to figure in. Among the other six dancers were a Latino and a Tongan, both with enough pigment to type them out of a Mayflower Voyage film. We didn’t know whether to take a picture (because who would believe it) or accuse our boss of Blaxploitation. Because of course there were also the two black backup singers, the keyboardist and the drummer…

This doesn’t happen with a racist performer.

In fact, since my first gig with Cher twelve years ago, I have missed only 2 of her 568 full stage shows. Never in any of them have I experienced any form of racial or sexist prejudice.

It’s not her style.  I was there every time she strutted around stage in a Native American feathered headdress singing about her Cherokee heritage.  Early in a career older than all of her dancers, she was notorious for entering the back door of venues and restaurants that would not allow her colored staff through their front. She argued with her fans via Twitter that the Tea Party supports racist policies.  She funds the Peace Village School in Kenya for black orphans. 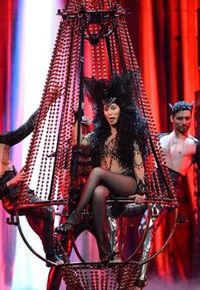 You know, there was a budget for my hair. When I ran out of Mixed Chicks conditioner on the road,  or couldn’t find a barber for a manicured fro, Cher reimbursed receipts for cornrows. It did not bother her any when I walked on stage wearing them, black pants and a white tank—a look that might have gotten me shot by police in Ferguson—to stand in her spotlight and present her a stool.  This is the conversation we should be having instead, how my "Burlesque" costume with this hairstyle is life-threatening around those who would see a dangerous, uber-sexualized Negro thug.

During a delay in the tech rehearsal for the number “Dressed to Kill,” she sat waiting on the chandelier and smiled at me.