I recently when on a hunt for Cher mashups. Of course, all the new ones I found were using "Believe" (This is getting old.)

Cher in a Tea with Mussolini-era interview

Cher and other 80s-celebrities singing "What a Wonderful World." This is from a star-studded special called "An Evening with Friends of the Environment. A Meryl Streep website has a great overview of who participated. 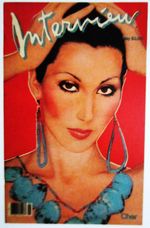 Cher scholar Dishy sent me this link to that awesome interview with Cher in the early 80s with Any Warhol in Interview Magazine: http://www.interviewmagazine.com/music/new-again-cher. I had this cover framed an on my wall for many years.

Cher scholar Robrt Pela sent me some very kewl news about the movie Chastity. A friend of his was an extra in the brothel scene. His friend said that Cher was pregnant and cranky during filming, "and when he accidentally stepped on her foot, she was not nice about it. Sonny took him aside to talk to him about not stepping on Cher."

But that's not the bombshell news. Nick Nolte is also in the scene when the boys arrive at the cathouse. Nick Notle is the first to enter the scene. Watch the clip at timestamp 5:07.

Robrt informed me that Nick Nolte was involved in Phoenix theater back in the late 1960s, appearing in local plays.

As I was looking for pictures of the brothel scene online (didn't find any), I did find this description of the movie from a site called Cult Oddities: "The film rests squarely on Cher's shoulders, though she got a major boost from Sonny's dialogue, which was littered with unusual thoughts and pithy one-liners."