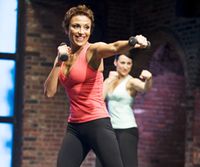 Wow! I believe this is the longest period I've gone between I Found Some Blog stories. It's truly been a crazy summer. I took Mr. Cher Scholar to Truth or Consequences for a hot springs soak for his birthday in early June. Then my mother-in-law and sister-in-law came to visit from Kansas. Then two of our friends came to visit from Los Angeles. Then I went on a poetry field-trip with a group of women from The Georgia O'Keeffe Museum (talk about some heavy fans, women who love Georgia O'Keeffe!). Then Mr. Cher Scholar and our two fur-kids went camping. Then I went on an 11-day family reunion at Bandon-by-the-Sea in Oregon. Then I came home and had a colonoscopy. Then I had to spend a week or two catching up on my other projects and thinking about my upcoming job transition and Mr. Cher Scholar's upcoming job transition, as he just found a new job. I'd be more exhausted but I've been working out still (since my Cher Scholar post on working-out) and I've found a few new interesting gurus.

By the way, when I was on my way to Oregon and in a motel, I saw a crazy infomercial for a new skin care line Periccone MD that promotes some pseudo-scientific substance Cold Plasma Sub-D. Preposterousness! But you know I'm itching to try it. 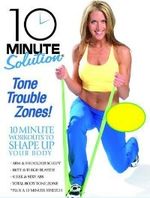 When I was in LA, I taped some fitness programs off of FitTV (a channel I don't get here). I finally watched them this summer and my favorite program was Australian Violet Zaki's kickboxing work out with "cardio blasts" and weights (pictured above).

I've also been enjoying Amy Bento's 10 Minute Solution series with bands. Like the other 10 Minute Solution programs, it's super fast and furious, made, I'm convinced, for type A women: "I need to see results in 10 minutes, people!"

My husband also bought me three yoga DVDs from Desiree Rumbaugh, but her programs are too slow and I don't feel advanced enough to do the neck and shoulder poses.

Here are some pics from the summer: 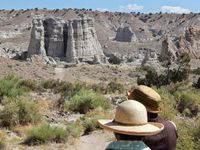 Poets contemplating the White Place in the Chama Valley of New Mexico. 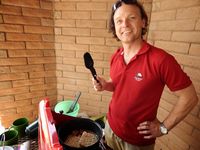 Mr. Cher Scholar really stepped up the cooking on our camping trip to the Manzano Mountains over the 4th of July. He made brie fondue, chocolate fondue, grilled shrimp, fancy tacos, and home-made egg McMuffins. 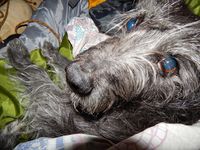 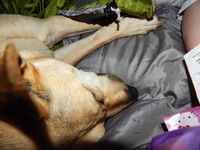 One of my favorite things about camping is to see too exhausted dogs snoring away in the tent every night. 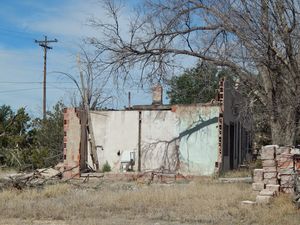 We camped near Mountainair, New Mexico, where we found this hilarious ruin of a motel with an old bathroom exposed to the highway.

So inviting: a John with a view. 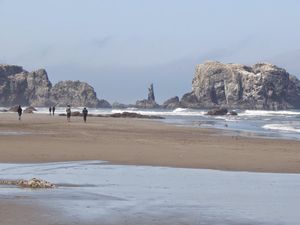 The Oregon coast where my mom grew up:  foggy, windy, rocky, full of a kind of dreary romance. A nice change from the burning hot summer I've been having in Albuquerque. 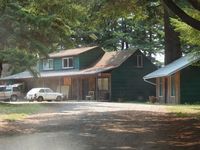 This is where my parents first lived when they were married in 1958, a little motel in Port Orford, Oregon. 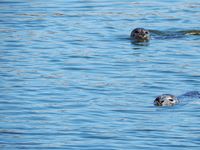 Seals swimming in the port of Bandon. 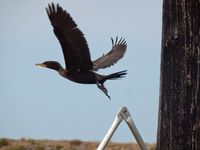 My best bird pic, from a beautiful boat trip up the Rogue River near Gold Beach, Oregon. 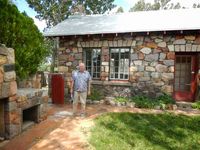 On the way back from Oregon, I drove my parents back to Reno, Nevada. We went to visit the Stewart Indian School, where my father lived when he was in High School. He's standing in the courtyard, in front of his old bedroom. 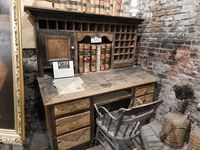 We also visited Virgina City, Nevada, where I paid five dollars to take a picture of Mark Twain's desk. 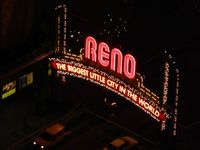 My Aunt Jane upgraded me to stay with her in the Star Suite at Harrahs in Reno. Instead of gambling, I stayed up in the suite all night, enjoying a luxury bath, taking pictures out the window (see left), and reading the biography of Carly Simon. I was in bed when I read the real lyrics to her ex-husband's classic suicide song, "Fire and Rain" -- "Suzanne the plans they made put an end to you."

I could never figure out that line, even when Cher sings it. "Soose and the plans they made put an end to you???"

The song is about his friend Suzanne. It all makes sense now.

That's a nice photo of your Dad at Stewart.

You might want to read some online reviews of Cold Plasma (or any new product) before you order it. Just sayin'.