What We Can Learn From The Maya Rudolph Show 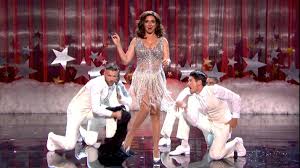 A few Monday's ago, NBC aired The Maya Rudolph Show. I'm always interested in new attempts at prime-time variety shows. These days networks are so anxious about variety shows, they will only allow these one-off specials in order to test the waters. If ratings do well, they promise a series. So far, none have made it.

Remember 2004's The Nick and Jessica Variety Hour? Then there was Rosie Live, The Osbournes Reloaded, recent specials by both Carrie Underwood and Lady Gaga.

Cher’s first show in her solo series was ostensibly a "special" too but it seemed understood by all that her show would make the schedule. In fact, Cher aired as regular programming starting the very next week.

I love variety shows and feel we've been enjoying many good ones over the years on late-night television (SNL, Mad TV and SCTV). Our last successful prime-time skit show was In Living Color.

So I watched The Maya Rudolph Show hoping for a breakthrough. Maya's is a very talented comedian and I thought maybe she might share Cher's vaudvillian abilities.

Unfortunately, all I ended up with was a list of reasons why Cher TV shows of the 1970s were so much better.

1. You need a self-deprecating and friendly host. Sonny filled this role on The Sonny & Cher Comedy Hour and Cher filled it herself on her solo show. Maya's opening was too much Gen-X irony with a number called “My Show” where Maya sang about my-show-this and my-show-that. Aside from the now-clichéd status of such meta-ironic narcissism, it's just not very host-ly. You need to be more welcoming. You don’t have to go overboard, but some kind of gesture is required vis-à-vis tone. In a variety show, it really isn't all about you. And courteousness here isn't a virtue. It makes the show work.

2. You need some extra-special bling. Maya's show reminded me of Cher's as she threw off one set of clothes for another in her opening number (a number that went on way too long). In fact, Maya changed outfits many times but, sad to say, they clothes did not meet variety show bling-bling standards and they didn't flatter her figure. The show needed a Bob Mackie, more fashion risk-taking, more outrageousness. The show Viva Variety understood more of what variety needs in the way of flair, even if it was just a spoof. (Finally, pieces of this show are starting to appear 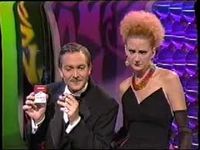 3. The host must exhibit a combination of conversational naturalness while simultaneously "owning it." For the most part, Maya's performance seemed too self-conscious. Hosts need to take charge and connect with the audience. They need the kind of common-ness that connects with middle-America but also the specialness that makes them a star.

3. The audience was too big and thus overpowering the stage with their cheers. It felt too SNL. In fact the skits seemed entirely SNL. The Garmin sketch was funny but I was reminded too much at all times of SNL, a show with a definitive tone. It is possible to come from SNL and break from its tone. The show Portlandia proves this is possible. But I am beginning to wonder if you sign on with SNL, are you indentured in servitude to Lorne Michaels for perpetuity?

4. The original music was mostly song jokes (again of SNL/Adam Sandler ilk). There were too stagey. They would have been helped by some dancing or animation or something. Joke songs make good records but bad TV.

5. Variety shows were awesome then and now because they brought together unlikely combinations of celebrities to see what would happen. Maya's show was populated primarily with guests who were too much like her. Where's the variety there? In Strong Enough, Josiah Howard talked about how challenging this was for the writers of Cher's show. They had to write skits that would work for diverse artists. It does sound hard. But that's why the payoff is so good.

It was charming when Maya oozed happiness at the end of her show, saying "Oh my God, this was fun!" But it wasn't as much fun for the audience. As a variety show host, you have to think beyond the my-show-ness. Secondly, good variety takes money. I wonder if any networks are willing to put bank behind that kind of risk anymore...for anything besides singing competitions.

If a network could combine that kind of The Voice-song-excitement (real feel-goodness) with edgy Portlandia-like skits and truly a variety of music and performers, they would have a winning show.