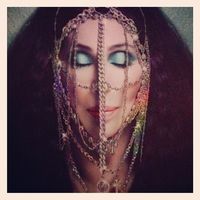 Philadelphia review with Philly with Patti LaBelle in attendance!

The reviewer comments on sitting next to Patti LaBelle and white-guy dancing observed at the show and the fact he thinks Cher needs to sing more. He says the show is worth seeing with tickets as low as $25 in some cities. "That's just over $2 per costume."

"Cher. Just. Is. The singer/actress, now 67, has been her own singular brand of spectacle since Sonny & Cher of the '60s. Her long career has embraced, in turn, Phil-Spector-style pop, thumping '70s kitsch, disco, hair-rock, mod burlesque, and Auto-Tuned house music, yet seldom in a manner you've heard elsewhere. Her quirky take on those genres and musical mood-swings was on full-feathered display Monday at Wells Fargo Center -- to the delight of a packed house, which was equally delighted by Cher's supporting act, the indestructible Cyndi Lauper...Actually, much of the show felt as if it was more a series of schmaltzy set-and-costume changes and Cher-chatter, with occasional songs thrown in. Luckily, her voice was delicious, filled with deep, long vowels, even when iced-over by Auto-Tune robotics during the techno-tronic 'Believe.'"

"Cher and Cyndi Lauper, two iconic singers, dazzled a packed Nationwide Arena audience last night in a concert that was impressive both musically and as a spectacle...[including] a mind-blowing, ground-touching Indian headdress of pink, blue and orange feathers for Half Breed."

Reviewer comments on the danger of the pedestal entrance and Cher's comment about it: "What’s my safety compared to your happiness?” Reviewer concluded, "At 67, she’s still the diva to beat."

Cleveland.com also did a profile of Cher

The article is reverent and has a very funny description of Cher in a headdress backstage. Also Cher gives more information about the genesis of Laverne, including influences from All in the Family's Edith Bunker. Most interesting are Cher's comments about not being inducted into the Rock and Roll Hall of Fame as she's basically making these comments in the Hall of Fames backyard.

Two things are interesting to me about this scandal: one, that Cher continues to champion Sonny as being snubbed along side her (when you could argue that her recording career has surpassed  not only many of the current inductees but their career as a duo in sales--as the Cleveland.com article mentions--and breaking Billboard records, not to mention setting trends)...but that she feels so strongly that Sonny should be a part of it; and two, that people are really, really behind her. Many interviewers ask her about this. Not just the Cleveland site alone, but David Letterman and others. It's starting to look like a glaring error on the Hall of Fame's part. She has a lot of support from interesting corners. 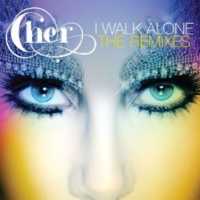 Because I love this CD single cover so much, I figured out a way to make a physical version of it for my shelf. If you buy this CD through iTunes, you can use the File/Print feature to print out your own CD cover. This includes the front picture and a track listing for the backside. You need your own plastic CD cover case but you can get a package of these at Best Buy or Target or other fine stores.

Incredibly, I've never worked-out to a Cher song. Not in aerobics or at the gym. I know! It's bizarre. I got on the treadmill yesterday to the first remix on the CD and it was a wonderful thing. Cher's voice somehow gets you to walk really assertively.

Mary,
lets re-vamp CHERS tour
as only we could do