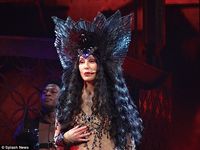 "certainly more Broadway than it was rock concert...You just never knew what was coming next. She’d sing a song or two in some outrageous get-up, generally made up of flesh-colored material and a few strategically placed scraps."

"featuring Cher in a groovy red mini-skirt. Sonny’s video cameo in “I Got You Babe” was less creepy than other such technologically generated collaborations. Maybe that’s because there’s plenty of heart in Cher’s spectacle, enough humor and shoot-from-the-hip candor to humanize the flashy excesses.

...a formidable catalog of hits" 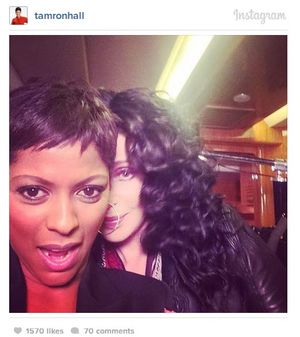 For more information, check out:

Cher also made a Today Show appearance, granting a rare tour-bus interview with Tamron Hall. They talked about Cher's shyness. Tamron talked Cher into doing a selfie, something she claimed she's never done. It's toots adorbes!