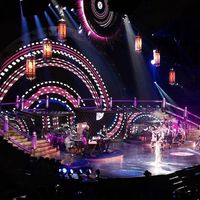 Star balances state-of-the-art production with doses of self-deprecation...She addresse[d] her fans while the arena's house lights were still on...this simple gimmick to start the show re-introduced the irreverent voice and personality that first captivated the mainstream in 1965...the show-opening "Woman's World" and "Take It Like a Man" -- sailed as fine examples of modern electronic dance music. All of the art direction for "Believe" called for a do-over.

A spectacular ride...the wide and varying ages of those present prove that she continues to appeal to the masses...Later in the evening, she would speak about the three things that she remembers about the Detroit area: that one of her wigs once fell off here, that she found her cat underneath a tour bus while performing here and took him home where he became "the luckiest cat in the world" and that at one time her late husband/singing partner Sonny Bono worked in Detroit.

Low-key restraint was never Cher’s bag and this concert reeked of excess, sometimes to the detriment of the show. The overblown staging seem to overwhelm the songs and there was a constant beehive of activity onstage, especially when acrobatic dancers were swirling overhead on circular metal cylinders...The best moments, for me, came when Cher toned things down. Today is the first day you can purchase the remix album of "I Walk Alone" on iTunes or Amazon. I haven't seen a physical CD release and somehow doubt there will be one.

Which sucks because I love this cover and it would look great alongside all the other CD singles we all have.

Cher's in Elle Magazine will hit the newsstands next Tuesday as reported by Cher News. You can also find sneak peaks of photos there.

Cher tweeted that the tour will be extended at the end of the year (yeah!), but no word yet on ticket sale dates

Cher News found some interesting posts pertaining to Cyndi Lauper who has just joined the tour in place of Pat Benetar:

It seems to me that this tour happened too fast and did not get the planning it needed.
I saw the Tulsa Show and it just seemed dis-jointed and no real direction from any point..
Cher and the dancers did not seem in sync and anything they did, did not flow with the song and cher coming in and out.
This tour is not like the other well-thought out
tours she has done.
A really COOL beginning...
another beginning
a middle
another middle(past cher
and s&c)
a slow down
etc..
the costumes suck on this tour
even the tour book had
very little to offer....
she doesn't even do
The Way of Love or other slow song in a cool bob Mackie gown and her '70's hair.

cher did not seem to be a part of her band or the dancers like the other tours... she seemed out there... but, not with them.

I think I blame a lot of it on the fact, that they use tooooooooooo much
dance music in this concert... on youtube it even looked like she might have been lip-syncing..but, YT does have it's sync problems..
IT WAS NOT THE ROCK N ROLL/
POP/STANDARDS CHER THat ALWAYS ROUNDED OUT HER OTHER CONCERTS....
lets be honest... the cool thing about a cher concert opening is the song she chooses that never has anything to do with her recording career...
etc... etc... etc.....
those kinds of surprises
did not happen this time.....

I mean PLEASE
SHE DIDN'T THINK IT WAS IMPORTANT ENOUGH TO SING
"AFTER ALL"
SHAME
SHAME
SHAME
HER AND DORI MUST HAVE BEEN
HIGH WHEN THEY THOUGHT
THIS THING UP....