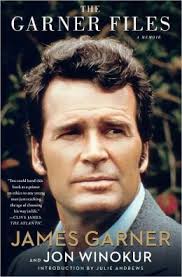 Once in a while I do indulge in one of my  minor celebrity obsessions. I have a short list of them and after reading The Garner Files by James Garner, which I found at a used book store, my Rockford Files and James Garner obsession has surged. I've cued up The Americanization of Emily (with Julie Andrews), and Support Your Local Sheriff on GreenCine. Mr. Cher Scholar has also taped The Great Escape  for us on cable. I’m especially interested to see Support Your Local Sheriff, the movie Garner says is the best satire of a western. Since John worked on season two of the Hulu show Quick Draw, I thought he might be interested in this one too. Quick Draw just received some good press from TV Guide who called it "an offbeat show you should be watching" and the show was also listed as the part of the future of television in an essay by HDVideo Pro: "TV V.2.0 : Led by streaming and binge viewing, television is going through a revolution").

Anyway, there are rumors that James Garner might be on near death due to another recent strokes. I’m glad he wrote a book and a feisty one at that, full of Hollywood and political dish. Like Cher, he’s another outspoken progressive.

There were a few excerpts in his book pertinent to Cher scholarship. As you know (especially if you’ve read Cher Zine 3), I am a passionate defender of Cher’s work in commercials. I’m happy to say James Garner is on my side. He talked about his experience doing those famous Polaroid commercials with Mariette Hartley.

“I had a lot of fun doing them. I’ve been asked a hundre times about the “stigma” of doing commercials. Well, I’m an actor. I hire out. I’m not afraid of hurting my image. I figured if Henry Fonda, Laurence Olivier, John Wayne and Orson Wells could do commercials, so could I. If you do it right, you don’t demean yourself by selling a product and you can be just as good in a commercial as in a feature film.”

Like Cher, James Garner was both a TV and movie star and he talks about how hard it used to be to jump from TV (where there was a real stigma) to movies:

“Throughout my career, I’ve gone back and forth between television and movies. I started on TV back in the 1950s, did movies in the 60s, went back to television in the 70s and did them both from then on. Clint Eastwood, Steve McQueen and I were the first to make the leap from TV to movies, but it was unusual. Television was a second-class medium for a long time. When we started, being on television carried a stigma. There was a pecking order: stage actors were next to God, film actors were right up there with the angels, TV actors were beneath them, and commercial acting was the dregs. If you were  a television actor, you weren’t allowed to do movies…Today if you have a hit on TV, you get just as much respect, maybe because there’s so much competition on television…I always felt movies were easier. The pace was slower and the pay was better. Television was more demanding, both mentally and physically.”

Garner has plenty to say about Hollywood and fame. Here are some excerpts:

“It was once reported that I paid the seller of maps to the stars’ homes to take me off the list, but that’s not true. I may have threatened to give the guy a shot in the mouth, but I didn’t bribe him.”

“I hate everything about show business but acting…I don’t read anything they write about me. I never liked making personal appearances or getting my picture taken…I’d rather dig a ditch than do an interview, let alone a press junket where you sit in a hotel room all day while a hundred reporters work you over one by one. I never liked premieres or entourages or anything associated with celebrity. I’m not too crazy about limousines, either.”

“I don’t give a damn about awards…I didn’t get into the business to be better than anyone else.”

“I couldn’t stand fan magazines. Even as a teenager, I new they were bullshit. I’d look at Photoplay and think, What a bunch of phonies!...I never understood the whole fan thing, because I’ve never been a fan of anybody. How can you care so much about someone you never meet?...The fan magazines were so sleazy, they weren’t saved in libraries like old issues of Life or The Saturday Evening Post. I’m glad.”

“I hate Hollywood. You say, 'Good morning' in this town and they say, 'What did he mean by that?' Maybe that’s why they never understood me…The industry is like it’s always been, a bunch of greedy people…I never got along with studio executives…They’re in constant fear of losing their jobs, which makes them indecisive. In negotiations, their goal is to get the best of you, not to make a good deal for everybody involved…Hollywood is dishonest, it’s petty, and it’s ageist…It’s worse for accesses. Women come into their own in middle age—their smarter and more attractive. I thought Lana Turner was much more interesting at forty than she was at twenty….William Goldman was right: in Hollywood, nobody knows anything.”

And if you like those blurbs, this book is full of a small-town boy from Oklahoma speakin’ his mind.