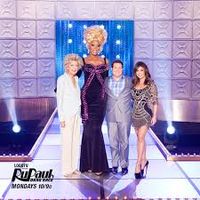 RuPaul’s Drag Race was on a few Monday’s ago and I just watched it. The challenge was for the drag queens to pretend to interview Chaz Bono and Georgia Holt. Chaz seemed very bemused-to-annoyed during all but two of the interviews. Georgia tried to appear upbeat but most of them were pretty bad. One queen kept saying “that’s amazing” and “that’s so cool” inappropriately when Georgia talked about starving during the depression. One asked only yes or no questions, one ignored Georgia entirely (even when Chaz tried to steer the interview towards her), and one queen kept calling Chaz Chad (this one got the boot). One queen made the faux pas of doing a Cher impersonation. Chaz commented that unless it’s a Chad Michaels performance, why bother? It must be very uncomfortable for Cher’s family to endure Cher impersonations. For whom does an impersonation impress? Cher is really un-imitable. As The Beat Goes On tele-drama proved, it's damn near impossible to cast a faux Cher. I sometimes feel tributes are closer to the mark. The Neil Diamond-tribute SuperDiamond was almost better than the real thing. Tributes seem to get closer to the tone of the person somehow and put less emphasis on exterior mannerisms. 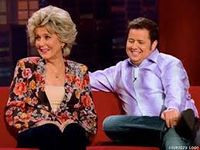 One queen asked Georgia about her almost-abortion of Cher. Gerogia claimed she was simply stunned by the question but the look on her face was sheer shock and dismay. The abortion-questioning queen apologized to Georgia later and Georgia was gracious with her forgiveness. In the Untucked aftershow (which I am thankful my DirectTV DVR is automatically taping), the queen expressed dismay that they would both tell Cher he was an asshole.

Apparently the queens suffered from nervousness but these were mostly weird interviews. Of note, Chaz talked about his feelings of identity at age 13 and Georgia said she saves everything. 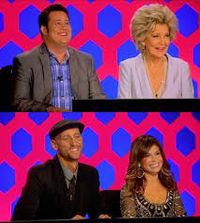 Paul Abdul was also a judge on the show and the Lip Synch for Your Life was done to her "Vibeology."

Chaz was a diplomatic and nice judge, commenting on nerves, and those who appeared uncomfortable as interviewers. He was always nice about it.

All the queens defend Cher in Untucked show.

The aussie Courtney Act conducted the best interview and won the challenge (and some wigs). She was very like-able and flirted with Chaz. Her wing costume was also amazing. Bende la Crème was also very good.

Courtney Act (Shane Jenek) and Adore Delano (Danny Noriega) are two Drag contestants who have previously competed on American Idol. Shane tried out as a man and did not make the tryouts. He came back the next day as Courtney Act and made it. Watch him perform on Australian Idol Season 1. Danny Noriega competed as himself. Watch his performance on season 7.