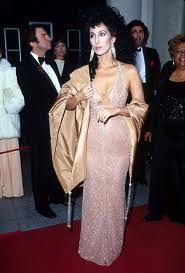 Cher scholar Dishy notified me a few weeks ago that Turner Classic Movies was airing a documentary called And the Oscar Goes To in which Cher is interviewed and occasionally appears.

There are brief clips of her talking about her Academy Award night experiences. They show clips of Sonny & Cher arriving at the 1974 Oscars and Cher's presenting of Best Original Dramatic Score where she fumbles over Marvin Hamlisch's name. Cher was wearing the floral dress below when she presented with Henry Mancini (watch her present).

To left is her appearance there when she was nominated for Best Supporting Actress for Silkwood. 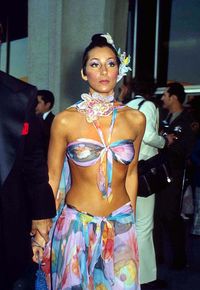 The documentary is more about this history of the academy awards show itself and of the academy's politics and it was interesting and straight-forward, but one thing was missing: I didn't see that famous David Niven and the streaker clip. That seems to me a major Oscar's moment and spoke to something going on at the time culturally. That clip also occurred the same year Cher gave to Marvin Hamlisch.

Watch a video of the moment and why it was important. If I'm not mistaken, as David Niven delivers his ad lib you can hear Cher's crane laugh in the background.