The Drama of Cher News 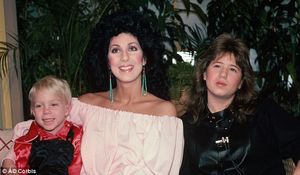 I’ve been MIA the last few weeks due to a research project I’ve been working on.

But last week was depressing week anyway for Cher news. Eljiah Allman gave a supposed “tell-all” to Mail Online magazine (are they a tabloid? A magazine? I don’t even know). They heard he was now married and called him to get a scoop. They got one…sort of.

But by the end of the piece, Elijah’s mom doesn't look that much worse than other bull-headed parent out there. It sure didn’t rise to the level of No More Wire Hangers in any case. Which didn’t make it any less sad.

Growing up in Hollywood is hard: nannies, the physical and emotional absence of parents, peer and parental drug use, shallow behavior (the rest of American is catching up there), the problem of how to live up to your famous parents. Most kids take the harder route of leaving school early and trying to do one of these things that Cher’s kids have already tried:

Some like Elijah may feel they are above the antics of Hollywood but their aspirations belie the truth. They don’t run off to missionary work or become scientists or teachers. One problem is they usually aren’t around to witness the struggle, the obscurity, the real work their parents put into their early careers. By the time they come along, they witness only the press, the entourage and the living large.

The interview didn’t reveal anything about Cher we probably didn’t already know, except the private details we maybe shouldn’t already know. Cher has been a celebrity since she was a teen. For whatever reason, she’s probably a flawed parent. Not big news there. But Elijah admits she tries and in admitting that he’s admitting a lot.

In unrelated but kinda related news: people in New Mexico are literally freezing to death because they can’t afford the cost propane to heat their homes.

Someone should write a book about the phenomenon of growing up in Hollywood with famous parents. I know of one offspring of a very iconic artist who lives in another man’s LA garage and has become a hoarder.

"I know it's confusing for you but I love Elijah. And like Chaz, he is my heart. I've said I truly regret some of my choices. But his truth is, well?"

“It’s true [Warner Brothers] hasn’t got a Great Deal of Interest In My CD,” Cher wrote on twitter. “Not ALL [the staff], THERE R HARD WORKING ADORABLE PPL. But Decision Makers Don’t Seem 2Care That Much.”

…some countries around the world would not even realize Cher has a new album, with no advertisements, press, posters, zero promotions from Warner Bros records.  The album simply relied on Cher’s star power appearances on US TV and in Europe without any follow up promos from Warner Bros.

Or videos to speak of. And this is after a debut at #3, two hit dance singles, “Woman’s World” (#1) and “Take It Like a Man” (#2) and heavy concert ticket promotion that helped the album enter the Top 40 again recently with a 160 point jump to #36. My billboard-watching friend Christopher contacted Billboard directly to ask about how the concert promotion is working. Unlike how Prince promoted his album Musicology, (been there, got one), CDs are not given to all attendees of shows. You have to redeem your free copies as an extra step and that makes all the difference to Billboard. Apparently, according to our source, Tom Petty, Bon Jovi and Madonna have also used this promotion.