Cher Concert Billboards Across America 2
The Drama of Cher News 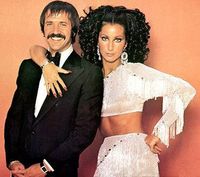 This is the first book that delves into detail about how the skits and segments of The Sonny & Cher Comedy Hour came into being and from where all the players came from. The book also explains more of the creation of Cher's Laverne character. One of my favorite stories was how they had to bribe 250 people from the farmers market next to CBS Studios with food to attend the first taping. Howard also summarizes the initial reviews of the show and the types of fan mail the show received. Hair guru Gary Chowen said the show was about 3 things: Cher’s put downs, fashion, and hair. Chowen even elaborates on the odd ways the hair constructions were put together.

Seeing as I had just seen the Sandy Duncan episode (and noticed something vaguely discomforting about it), I was amazed to read that Cher and Sandy Duncan had then fought over Duncan's come-on to Sonny and that Truman Capote had made a pass at Sonny as well (Philip Seymour Hoffman RIP). It was also fun to read about visitors to the set, like Sammy Davis Jr., over from taping All in the Family, the POW, Ronald Reagan, and more about S&C's mysterious 21-room mansion on the old-Hollywood Owlwood compound.

The book also lists Cher's occasional award nominations, from the Grammy for best pop performance by a duo for the Sonny & Cher Live album by duo to the best pop vocal performance nomination for "Gypsies Tramps & Thieves," and Howard elaborates on the vocal changes Cher was going through, losing her “teenage angst whine” and taking on a “new sultry, low-register, contralto accentuated by a dancing vibrato.” Howard also details more about the Bittersweet White Light album including the discrepancies on the back cover credits and he interviews the songwriters to some of Cher's biggest hits of the early 1970s, hearing their later-day opinions of her versions. He also captures some interesting old reviews, including the fact that Rolling Stone Rolling Stone thought her voice (with its country sound) was attractive and that Creem loved "Dark Lady."

I haven't even began that book yet! Bad CHer scholar!