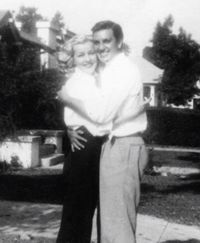 So we've been discussing the new and wonderful Cher biography in detail. I wouldn't say this is my favorite Cher biography, (that would be hard to choose), but this is definitely a packed one and only the second one to have been published since I started this blog.

The two pictures here are not included in the book but they are new pictures I've come across recently (Cher posting on Twitter?) that seem to epitomize something interesting about a particular time in Cher's life.

All biographies give Cher's ancestry and childhood short shift. This biography spends even less time on her childhood since the book is ostensibly not a full-fledged bio. That said, the book does illuminate a few shadows in her story. This is the first biography that I have read that tells the story of Georgia's father trying to kill her and her brother and about her life in LA's Skid Row.

I also appreciate how the book gives more detail to Uncle Mickey. He seems like a somewhat important fixture in the story and we don't know much about him or his relationship to Cher and Georgia (except in flashes). He was involved peripherally in the Hollywood music scene after all. This book gives us more information on that in tidbits.

We also get a bit more about Cher's father. Although he was a troubled, often absent figure, his story is important. His story (and even the story of his parents and grandparents) matter in explaining why he was a troubled and absent figure in Cher's life (and why he was trouble when he was present in Cher's life). If he had been the perfect Dad, Cher wouldn't be who she is today. She'd be, for better or for worse, someone completely different. So his story matters, good or bad.

American Indian writer Leslie Marmon Silkos has some famous quotes; one is "You don't have anything if you don't have the stories." She meant that if American Indians lose their stories (and therefore their culture), they've lost everything. But I think we can extrapolate this idea to what we value about everything. Nothing is more valuable to us than our own story. And no story is disconnected from the stories of our parents.

So it's good to finally know why Cher was born in El Centro. Why were they down there? Turns out this has to do with her paternal grandfather trying to help out her father.

I love how Howard really breaks down her name and is concerned with the spelling of it. Finally!

The book also details Georgia's marriages a bit more (although I swear this trail of marriages needs a flow chart or some kind of visual aid or something). I wish we could get a detailed list of all the LA neighborhoods Cher lived in and all the schools she attended.

Along with many more childhood stories. I loved the ancestor stories in Cher's special Dear Mom, Love Cher but we need more, more, more. You don't become Cher right out of the box, for Chrissake.

This early picture of Sonny & Cher intrigues me because I think Sonny's main "Achilles Heel" regarding Cher was that no matter how far she grew into a glamour girl, no matter how much she matured, Sonny could never see anything but the young girl in this picture. And that was his fatal flaw.

I like how the recent Easlea and Fiegel biography put their music in context with what was happening at the time. This biography goes into more depth as well, but not regarding the music. Howard talks about how Sonny & Cher first connected and why, the desires they had in common. Howard also fleshes out Sonny's relationship to his first daughter Christy a bit.

And Howard also adds some new light to their financial situation through "Baby Don’t Go" and "I Got You Babe." Did you know "I Got You Babe" is the second most played song by astronauts, number one being Rush's "Countdown."

The book also is the first one to address Sonny's temper and witnesses to his explosions, from Les Reed talking about working with him on the show Ready Steady Go to quotes from friends who saw his personality change as Sonny & Cher became more famous. Is this because Sonny has passed away and people finally feel free to speak about it?

The book also addresses rumors that surrounded Sonny & Cher from their inception: that Sonny beat her up, that Cher was really a man. What wackadoodle things people are saying about you, this is a constant phenomenon that would plague Cher throughout her whole famous life.

The book lists out the various public service announcements Sonny & Cher were involved in, not just the anti-marijuana one. What would Sonny make of the current legalizations of marijuana? There was also the stay-in-school psa which you can hear yourself at the end of the "Hello" track on your The Beat Goes On, The Best of Sonny & Cher CD. This spot is overly ironic since neither of them did, in fact, stay in school and they were doing just fine and therefore were horrible examples for such a message. Sonny & Cher also did a spot apparently for National Bible Week. Surely it was the cumulative effect of all these unhip psa's helped to put their career in the shark tank.

By the end of the decade, after essentially funding their own interestingly flawed independent film (ahead of its time really; everybody is now funding their own interestingly flawed independent films), Sonny & Cher were, as we all know, broke and owning the government $200,000 in unpaid taxes. My question to this factoid has always been, why did they owe this much in back taxes?  Did they have a Willie Nelson moment or was it some unscrupulous accountings?

When I took a Greyhound from Michigan to San Diego in the 80s, the bus stopped in El Centro, positioned itself over a hole in the ground, and the toilet got emptied out. I thought of Cher.