Cher in FLATT Magazine
Cher in the 1970s 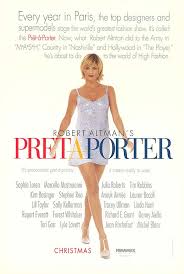 So a few weeks ago I broke down and bought the two Robert Altman movies with Cher cameos and did a positive review of The Player.

In comparison to that movie, Pret-a-Porter (or Ready to Wear) has a much more European cast and vibe, complete with 1960s-inspried opening credits. The film didn’t work as well as The Player did in the re-watch however, even after years of my watching Project Runway and Ru Paul shows.

The movie seems to be trying to showcase the cut-throat excitement of the fashion world’s “behind the scenes” and the shallowness of its players. The so-muchness of every performance and scene began to take on a one-note quality that became numbingly boring after a while. The reviews on the DVD claimed the film was “exuberant” but it read instead to me as manic. Mr. Cher Scholar watched most of the movie with me and I ended up receiving a very long and informative lecture in the middle of it on improv and the movie's issues (outlined below). Mr. Cher Scholar was formerly a Chicago improv director. I didn’t even realize before his schooling that the movie was improved! 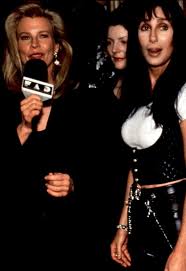 There was a shorter, mostly European, list of “As Themselves” cast members of which Cher and Harry Belafonte were the two I recognized.

Cher’s is seen in two scenes, one arriving to a show (as seen on a TV) and the other being interviewed by Kitty Potter (Basinger). You get a good view of her old necklace arm tattoo. She wears a busty white t-shirt top with a leather-like quilted bustier and pants. She talks about how we can never look like Naomi Campbell or Christy Turlington and how these shows are about “women trying to be beautiful,” calling herself a “victim as much as a perpetrator” when Kitty Potter says, with admiration, "Well, we can’t all look like you either." Cher says it’s not about the clothes on your body but what’s inside that counts.” 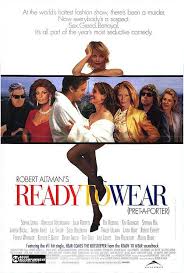 This reminded me of when Kitty Potter introduces the photographer Milo and says that for a decade he has “controlled how women think they have to look.”

Cast members who connect to Cher: Linda Hunt won the Best Supporting Oscar we were hoping Cher would win for Silkwood. Teri Garr (of The Sonny & Cher Comedy Hour) has a very funny part as the co-hort of Danny Aiello who played Johnnie Camereri  in Moonstruck. Sally Kellerman was in the movie Foxes where Cher had a song on the soundtrack, "Bad Love."

Oddly, none of the clothes or hairstyles portrayed on the DVD cover to the right appeared in the movie. And who is that blonde woman?