The Drama of Cher News
Review of Pret-a-Porter 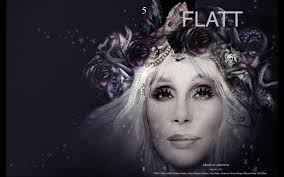 Cher scholar Michael recently informed me that Cher did an interview for the new magazine FLATT. FLATT is a philanthropic arts organization that “celebrates creative entrepreneurs and contemporary philanthropic ideas.” I found my copy on eBay because I am two states away from a decent newsstand.

The cover is gorg and the interview was done by Christina Lessa. It was an exceptionally good one, too, and not just remarking on clichés about how Cher is an iconic diva. Lessa effused instead about Cher’s humanness and her status as an underdog and as a pioneer, how she always tends to steal the show (even still), and how she never looks like she’s trying. Yes, thank you! Cher herself talks a bit about singing with her mom, grandfather and uncle, her grandfather playing the guitar (love those stories!). Cher also talks about the dichotomy in her personality of being both loving and mean. She admits she has “a list” of at least one item she requires in a mate: he must be a good artist. She talks about doing a PSA for suicidal servicemen (so heartbreaking!) She also talks about discussing reality shows with Elijah and how she hates them. It even seems unlikely that she would like one with Elijah in it.

This is a big beautiful magazine with lots of amazing art and photographs. Surprisingly the magazine had two sections of poetry! “Poetic Narrative” by Marc Straus (with artwork by Bruce Robbins) was my favorite of the two represented. His were lyrics with a lot of juxtapositions of random lines. But there was  an undercurrent of a story about a father. These poems reminded me of William Carlos Williams as they were written from a doctor’s point of view. His poems also contained a large amount of scene-setting, some interesting lines like “Rivers drowned in each others’ mouths,” class issues touched upon in “He went to the suburb where/they judge your lawn,” and American critique: “He said that 90 inch drapes were 89 inches long./That one inch made America rich.” The other poet Jason Armstrong Beck was included with a poem called “Dust Storm” mostly a visual study.

Quite an impressive magazine but the typos drove me nuts.