Music I Got for Christmas and How it Relates to Cher
Strong Enough Biography: Childhood Through the 1960s 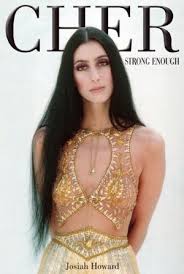 Because this book was so dense and illuminative, I'm going to have to take discussion and scholarship of it into sections, starting with her childhood and going through the decades, even dividing up the 1970s into several separate posts.

Why is this? Because this was an actual book of Cher scholarship. Made for a Cher nerd like me. And amazingly, like a real book of pop-culture scholarship, its scope was very narrow, primarily a review of Cher's life in 1975. Just one year! A whole book about one year!

Not only that, but the book delves into that solitary year and 29 episodes of a TV show most people don't even remember existed! How awesome is that? It's great for someone like me but most likely confusing for someone looking for a balanced biography of her life. The book's narrowness is not indicated from its cover. This is not a pop-star biography. This is more of an academic book. The thing has notes in the back for pete's sake. All pop-culture academic books have notes.

This is not a criticism against other fine Cher biographies out there by George Carpozi, J. Randy Taraborelli, Mark Bego, and recently, by Daryl Easlea and Eddi Fiegel. These biographers may in fact have had notes for their books as well; but possibly they were not published due to constraints from a publisher or due to audience expectations. Notes aren't mandatory but they do provide a wealth of information for further studies.

But this makes this biography's title (and lack of a sub-title) all the more confusing. Why such an open title with no indication that this is not a mainstream biography? It would seem this just frustrates a more casual fan who isn't into reading the minutia of every single episode of a somewhat obscure (in retrospect) television show.

Josiah Howard is an excellent  researcher and reporter (something I admire and will never be; too shy). And as a Cher scholar, I fundamentally appreciate his efforts in combing through Cher artifacts, researching press clippings and conducting interviews with as many players as possible to throw a light on a year many other biographers pass through quickly. I would love to see this kind of treatment made individually for Cher's other television shows and specials, her movies, her videos, and for her albums and concerts.

Howard really brings to life the schedule of a television show, something J. Randy Taraborrelli also did well with his book on Carol Burnett (Laughing Til It Hurts: The Life and Career of Carol Burnett). I'm fascinated with the ins and outs of television production. You get perspectives from producers, stage-hands, choreographers, guests and regulars.  Gailard Sartain did contribute his experiences but uunfortunately (and noticeably absent) were interviews from Teri Garr, Martin Mull, and Steve Martin. Teri Garr and Steve Martin, in their respective biographies, have not really spoken in detail about their experiences working for Cher or Sonny & Cher. Not only did Martin write and perform on both The Sonny & Cher Comedy Hour and Cher but he opened for Sonny & Cher on occasion. Teri Garr appeared in The Sonny & Cher Comedy Hour, Cher and The Sonny & Cher Show. I've followed their interviews and autobiographies for years and their silence or briefness on this topic is a little unsettling. You wonder if they are they all still friends.

Howard not only covers the show in detail but he puts his head around large-scale issues of Cher's tumultuous personal life, her hopes for the show (its focus on rock music), the reasons why variety shows started to falter in the mid-1970s (reflected in the issues that made her show a struggle to do: family hour, the political life of America, the show's competition). Howard documents sketches, songs and guests, detailing stories about production, the rise of Cher in the tabloids and other gossip boiling around that time.

So much food for thought. Next week, let's talk about how the book deals with Cher's childhood and her life in the 1960s.

and thanks...
today, I was at the library and they had filled this entire shelving with biographies..
I saw
dolly
Linda Ronstadt
maya angelou
I guess there are a lot of bios out now, either by the person themselves or someone else.
I have been wanting to buy from 1/2.com
the Elizabeth Montgomery bio by Herbie Pilato
and
the Barbara Eden bio
by her and a ghost writer.
I love bios and documentaries
I watched "pink ribbons, inc" last night....

I meant the library
had in the NEW book section an entire special
shelving of bios...many of
them were recent or new.
jimmydean